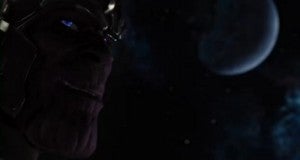 Marvel Studios President Kevin Feige has apparently confirmed that Thanos will appear in the upcoming film adaptation of Marvel Comics's Guardians of the Galaxy, according to Ace Showbiz.

"I've got a story I wanted to tell the world [that is] not directly related with the characters of The Avengers, [until] a little later," Feige reportedly told a Japanese reporter in an interview promoting the release in that country of Marvel's The Avengers.  Asked whether Thanos ties into those plans, and the plans for a Guardians of the Galaxy film, the studio exec reportedly answered, "I'm out, of course, because there is meaning [to the credits stinger.]"

That's being interpreted as confirmation of a belief that comics fans have had essentially since Thanos appeared in The Avengers, and which therefore didn't need much confirmation in order for people to feel at home with it.

Thanos has ties to a number of the characters in The Guardians of the Galaxy in the comics, and was a major antagonist in most of their recent stories, including the arc currently taking place in Avengers Assemble, the most movie-friendly of all of Marvel's Avengers titles, which sees them team up with a team of Avengers featuring a lineup identical to that of the film's.

Recent rumors have pointed to Kelly Sue DeConnick taking over the writing chores on Avengers Assemble after this story, with the current writer of the series (Brian Michael Bendis) leaving The Avengers behind to write a new Guardians of the Galaxy series for Marvel NOW!.

Guardians of the Galaxy Likely to Face Thanos on the Silver Screen, Says Marvel Exec