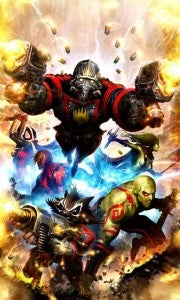 At today’s Iron Man 3 panel at the San Diego Comic-Con International, Marvel Studios confirmed long-standing rumors that Guardians of the Galaxy, the “Avengers” of Marvel’s cosmic universe, will be the film the studio has planned for an August 1, 2014 release. That’s pushed back from May 14, when the film was originally scheduled to be released. It's not yet clear who the director or stars of the film will be.

Rumors began circulating last month that the property would be announced at Comic-Con after Latino Review had it confirmed anonymously for them. The property first entered the discussion for possible Marvel films back in April, when Marvel Studios President Kevin Feige told fans it was a property he was excited about developing.

The comic book series, which stars a group of B- and C-list Marvel heroes who gather in deep space to be proactive to cosmic-level threats, rather than just waiting for stories like The Infinity Gauntlet to happen and then reacting to bad guys who are starting with an advantage.

With members like Adam Warlock and Drax the Destroyer, the team is closely associated with Thanos, the character who is widely imagined to be the villain of The Avengers 2 after he appeared during the closing credits of Joss Whedon’s team-up epic.

That said, Marvel announced the team's lineup as Gamorra, Star-Lord, Draxx the Destroyer, Groot and Rocket Raccoon, so neither of those characters will apparently appear in the movie.

In the comics, the team recently began appearing regularly in Avengers Assemble, the Brian Michael Bendis-penned title that tracks a team of Avengers that’s made up of the same members featured in the hit movie.

It’s widely rumored that Bendis will take over a Guardians of the Galaxy monthly comic book as part of the Marvel Now! Initiative.

Guardians of the Galaxy Movie Announced for 2014