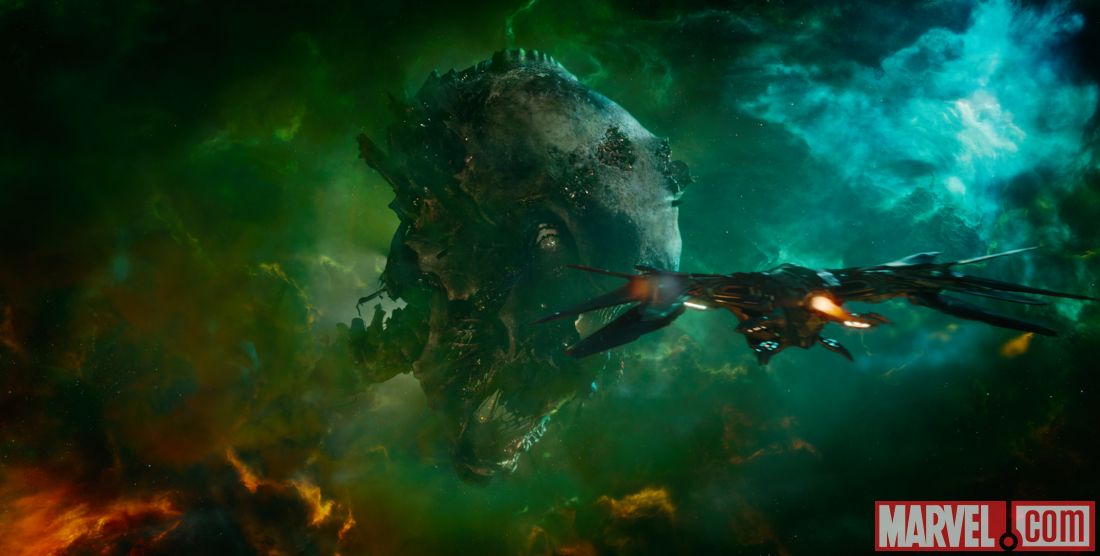 For most viewers who aren't regular readers of Marvel Comics, one of the most striking and potentially bizarre images in the recent Guardians of the Galaxy trailers isn't the talking tree or the gun-toting space raccoon, but the massive, dessicated head floating in deep space.

Called Knowhere, that's actually a locale that has served as home base for the Guardians in the comics -- and, yes, it's actually a head.

More specifically, it's the severed head of a Celestial, one of a number of ancient and powerful races in the Marvel Universe. Created by Jack Kirby, Celestials existed near the birth of the universe and created life and death along with the multiverse.

The Celestials also have ties to nearly every major group in the Marvel Universe. It's been established in-story that they are responsible for the creation of the Eternals and the Deviants and, via genetic manipulation, the existence of superpowers in mutants. They're also tied to the Badoon, the Brood, the Kree, Skrulls, Phalanx, Shi'ar, The Watchers and more.

They are enormous in stature, standing up to 2000 feet high, and in power. They can manipulate reality, rearrange energy and matter, teleport themselves or other objects and recover from harm almost immediately. An earthbound celestial known as the Dreaming Celestial has played a major role in a number of Marvel Universe stories, including the massive Heroes Reborn crossover event and X-Termination. His younger sister, the more-human-looking Ashema the Listener, was key in returning the heroes from their pocket dimension in Heroes Reborn.

Given the extent and frequency of their connection with the Fantastic Four, it's not clear whether the Celestials might be jointly-owned with Fox, like Quicksilver and Scarlet Witch are, for the purpose of film rights. The Badoon, one of the races with whom they've had an association in the past, reportedly have some weird rights issues going on as they appeared in the Thor: The Dark World tie-in comic, ostensibly Marvel Cinematic Universe canon, but Guardians of the Galaxy director James Gunn said that he could not use them onscreen.

And, yes, they've had major stories involving Star-Lord, Nova, Captain Marvel, Adam Warlock and Thanos, making them solid candidates for inclusion in Guardians of the Galaxy, although historically Hollywood has been reluctant to depict beings so massive onscreen. Fantastic Four: Rise of the Silver Surfer relegated Galactus to the status of a big cloud, and when pressed about the likelihood of working with Unicron in a future Transformers movie, producer Lorenzo di Bonaventura recently said, “The problem with Unicron is how big it is. It’s boring, that big. How do you stop it? We’ll get there, but when is a good question.” He noted the problems with Galactus, as well.

Knowhere is floating along The Rip, the edge of space and time. It's a bit like The Source Wall in DC Comics, another Kirby creation tied to the New Gods. It also acts as a common port of call (complete with a market and bar) for travelers from all points in the space-time continuum. The base is administered by its Chief of Security Cosmo, a telepathic and telekinetic Soviet dog shot into space and then lost in Earth orbit in the 1960s. Courtesy of the deceased Celestial's "Continuum Cortex", travelers with special "passport" bracelets can teleport to any point in the universe instantaneously.

Asked about the creation of the bizarre concepts in their Guardians of the Galaxy run, Dan Abnett and Andy Lanning haven't had much in the way of hard details.

"Honestly, they just came to us," Abnett said. "The severed Celestial head was, I think, something that popped out of Andy's mind one day. Similarly, one morning, I said 'what about a talking Russian dog?' We run with these things and develop them together. It's hard to pin down where exactly they originate."

It's unclear what role it will play in the film -- whether it will be a major setting, as in the comics, or whether it will simply be a port of call. It's widely suspected that this might be where many of the cameos, such as Stan Lee's or Nathan Fillion's, might take place but that could be true or not and is as likely to be founded in fan fiction as any kind of reality.

The use of "conventional" Celestials is one of the first big examples where the Marvel Cinematic Universe has parted ways with the Ultimate Universe. The influence of the Ultimates is obvious, but whereas the conventional Marvel Universe has massive, godlike beings with designs clearly of Kirby's doing, In the Ultimate Marvel universe, the Celestials are a race of powerful Asian metahumans lead by Shen Xorn.

Guardians of the Galaxy is in theaters August 1.

Guardians of the Galaxy: What's that Huge Head and Who are the Celestials?

My Hero Academia Teases the Return of Stain, Overhaul and More