Forget whether or not Superman ever wore his underwear on the outside or Wonder Woman has pants. The controversy that will linger after the first month of the DC Comics relaunch is complete appears to be the characters who don't even exist anymore as a result of the reset timeline.

On the eve of the first full week of New 52 releases, DC co-publisher Dan DiDio took to his Facebook page to answer fan questions early this morning--and gave some surprising answers to some of the questions that he and other DC executives have been avoiding up until now. DiDio, who famously ordered the retcon of the Linda Danvers Supergirl and the return of the "Kryptonian cousin" version to continuity after a visit to Six Flags, is no stranger to making characters disappear if they don't fit his vision of the DC Universe. He's never made apologies for it before, and with a massive overhaul of the entire publishing line in the cards for this month, some of the things he had to say are probably not surprising. It is, however, a bit fascinating that with less than 24 hours to go before English comic shops have their midnight release parties (last week they were unable to do so because of a holiday that delayed shipping), two of the apparent announcements may materially affect books that ship this week. 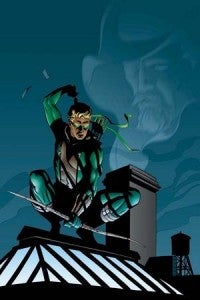 I am not personally friends with Dan DiDio on Facebook, so I'm taking the word of GreenLanternCorps.com (corroberated by various other angry commenter around the Internet) for this one. A quick look at his Facebook page (which is largely public) appears to suggest that he has either removed or made private all of these answers already, so I'm trusting a third-party source here...but one which has reported on his Facebook updates in the past and was right then.

First, for the predictable one: a day or so in advance of the release of Green Arrow #1 (by J.T. Krul, Dan Jurgens and George Perez), DiDio was asked about the existence of Connor Hawke, erstwhile Green Arrow and illegitimate son to current Green Arrow Oliver Queen. "Well, if Oliver Queen is in his mid-twenties..." teased DiDio. In case that suggestive ellipsis wasn't enough to convince readers that Connor is but a glint in Ollie's eye at this point, an earlier series of questions also answered on Facebook saw the executive tell a fan that there would be no Connor "as he would age Oliver older than we are portraying him." Given that he's been out of action for years, it's little surprise to see Connor officially decommissioned here, but he's still got his fans and they'll still be upset.

I will say, as a side note, that the non-existence of Connor effectively de-canonizes one of my favorite Justice League stories of all time, when he saved the League from The Key using his father's "silly" boxing-glove arrow. Wonder if we'll see that arrow in the new series anytime soon...?

Somewhat less predictable, but perhaps a little telling considering recent revelations about the status of the Justice Society and Earth-2, is DiDio's position that Keystone City (home of Wally West, the third and most absent of all Flashes) may have reverted to being an Earth-2 location. Does that mean that next year we may see a version of Wally running around (literally) with the Justice Society? Seems likely, since the dissolution of Barry and Iris Allen's relationship at the start of Manapul and Buccellato's The Flash #1 this month makes it hard for me to believe that Barry ever had a longstanding "work" relationsihp with her young nephew.

That said, West (along with longtime Wonder Woman foil Donna Troy) has been one of the characters asked about the most since the first round of solicitations revealed them to be (apparently) missing from the new DC Universe. His fans have been vocal, and irate, since he fell out of favor with editorial and disappeared into obscurity with Barry Allen's return and the potential to see him once in a blue moon on an "alternate" earth seems unlikely to satisfy them. 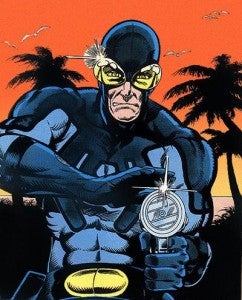 And now for the one that had fans on social networking sites collectively chomping down on their tongues and spewing fury: Asked whether the Giffen-DeMatteis era of Justice League stories were considered canon anymore, and whether Booster Gold was ever friends with former Blue Beetle Ted Kord, DiDio's response was a cryptic but menacing "Hard to be friends with people who were never around." Tellingly, he also answered at the time that he doesn't see Maxwell Lord (who killed Ted Kord in the old continuity and who has been reported as a supporting character in DiDio's own upcoming OMAC #1 this month, drawn by former Justice League International co-writer Keith Giffen) as evil, "just determined." Even discounting the comments about the JLI, it's hard to imagine a world where someone who shoots a superhero in the head is not widely perceived as evil.

When another fan pressed the issue of whether Ted might show up as a mentor to current Blue Beetle Jaime Reyes, DiDio simply stated that Jaime was the one and only Blue Beetle. That might mean that it'll be a while before fans get to see Ted Kord back in action, but look at it this way: If he was never Blue Beetle and therefore never killed, it opens up a whole new world of possibilities for the character. Besides which, remember that there was a time when Guy Gardner was running around calling himself "the one, true Green Lantern." How'd that turn out? ...Oh, yeah. 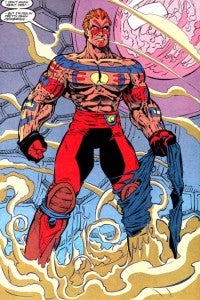 But don't worry, folks. I'm sure that story never happened, either.

Hard To Be Friends With People Who Were Never Around