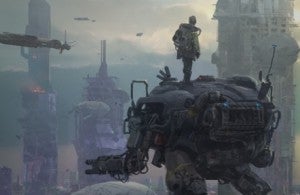 , a new digital comic is available in a limited beta from Archaia at ComiXology. Today's first issue, "Prelude to Ruin," is by Jeremy Barlow (popular for licensed comics adaptations like Mass Effect and Star Wars) and illustrated by Francisco Ruiz Velasco (concept artist on The Hobbit trilogy, Pacific Rim, and Hellboy 2: The Golden Army). Based on the award-winning first person shooter, the story explores the post-apocalyptic mythology behind the game's universe ahead of the full release of the game's full, free-to-play beta in December and an original graphic novel in March. Hawken: Genesis will be a prequel to the game, setting up the characters that drive the story and the world they're set in. It was developed by the comic creators in concert with the game developers. Four issues in total will be available for free preview on ComiXology. "Adhesive Games and Meteor Entertainment have developed such a unique and enticing war-torn future," said Wes Harris, Meteor's Vice President, Transmedia Publishing. "This digital release is a great way to expand our transmedia partnership with Archaia through comiXology while providing great opportunities for our fans to get access to the closed beta of the game." "Exploring the origin of that war and the dynamic, powerful personalities that set the political drama in motion was as exciting to create as it is to read," added Jack Cummins, President & COO of Archaia. "We're thrilled to premiere this material in digital form through comiXology and can't wait to release the full graphic novel for eager HAWKEN fans."