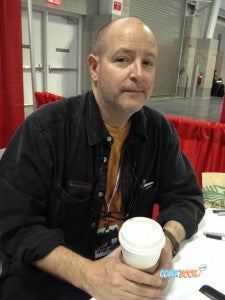 This afternoon at New York Comic Con legendary comics creator Mike Mignola, the man responsible for Hellboy, Lobster Johnson and the BPRD among many others, joined ComicBook.com for a quick interview on the lasting legacy of Hellboy, discussing the "series of miniseries" format the he inadvertently pioneered. At one point, 30 Rock star Scott Adsit happened to walk past Mignola's table in artist's alley, then turn back around to converse with the creator. Nothing he said was for publication, but in very general terms it seems as though he's already got a sense for his plans now that the popular NBC sitcom is concluding its run. And, yes, he discussed Hellboy III, that lingering question that Mignola, director Guilllermo del Toro and star Ron Perlman have faced at nearly every public appearance since the second movie was released. At the convention this weekend, del Toro was quoted by reporters as saying, in effect, that all that's needed is financing for the film...but Mignola doesn't necessarily like some of the director's ideas to pay for the project. I actually wanted to talk you about something that I found a bit surprising: I've spoken to a couple of creators this weekend who cited you as an inspiration not just artistically, but also in terms of business model. It seems that more and more, the Hellboy model of an ongoing series of miniseries is one of the most effective ways to get your creator-owned stories out there. I think that's great! That's nice, because I never think of myself as a businessman, but it is interesting that the model we used for Hellboy...I don't know...I mean I certainly didn't model it after anybody else, it just seemed like after ten years of drawing mainstream comics, that seemed like a really reasonable way to do stuff. And it helps because if you're so inclined, you can also do contract work on the side since you don't have a monthly deadline. Well, not much, but I did movies and things like that. I knew I didn't want to be committed to a monthly or bimonthly schedule, and I wanted to allow room so I could put it down and not leave everybody hanging. So yeah, the miniseries model worked the best. You've got a whole universe built up around the character, too. It seems like between you and Joss Whedon, it's like half of Dark Horse's output some months. Yeah! Well, it was never a goal to expand it just to make a bigger thing. It was simply having too many ideas and too many places where this thing wanted to spill out. And then you couple that with artists who come to you or you meet that you would like to work with and suddenly all these things are possible that I never imagined when I started. I really did think Hellboy would just be my book. But as soon as Hellboy outgrew the BPRD, the idea of all of these characters I had created having no home...it just didn't make sense. So the trick is to make sure it's an organic, natural expansion and not an explosion where you suffer from quality. The obvious extension of that, too, is that if someone came to you with something from other media, is that all wrapped up in Hellboy? Yeah, that is the one thing where I know people who are much more business-minded than me have said, "Why did you make Lobster Johnson related to Hellboy? Why did you tie all that stuff up into one universe?". It's becuase my main goal was never to make movies or sell TV shows. I wanted to create my comic book world so other than the Baltimore thing, or Joe Golem which I did as a novel, everything is all about fleshing out that world and making it an interesting world. So yes--all of that stuff that is Hellboy Universe is tied to that movie deal for Hellboy. Terry Moore does the same thing, too. Right. It's all about where your goal is. If your goal is to make a satisfying comic book world and a good read for your audience--which is what my goal is, and I assume Terry's goal, too--we're not looking at selling movies. And of course--my editor would kill me if I didn't ask about the status of Hellboy III. Well, somebody told me today that Guillermo yesterday said, "When Mike Mignola raises $150 million, then we'll make it." So if that's up to me, I wouldn't hold my breath.

Significant Other Filmmakers Explore Venturing Into the Unknown for New Thriller