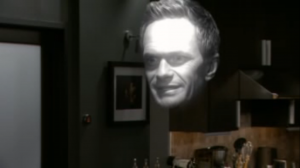 Yeah, they called it a "floating Jor-El head."

This is old news by now, but forgive us for just now getting caught up on our DVRs. CBS's hit sitcom How I Met Your Mother, which stars Joss Whedon alumni Cobie Smulders (Avengers), Neil Patrick Harris (Dr. Horrible's Sing-Along Blog) and Alyson Hannigan (Buffy the Vampire Slayer) and often wears its geek cred with pride, made us chuckle last night when Harris's character Barney attempted to mentor Josh Radnor's Ted via the use of a green screen hidden in a closet that allowed him to appear as an oversized, disembodied head and offer advice, a la Marlon Brando's Jor-El in Superman: The Movie.

And, yes, as we said, Ted calls Barney out on his obvious crib from the 1978 comic book movie classic.

The device still comes back a handful of times throughout the episode, though, generally to good effect, including once when Smulders uses it and affects Brando's accent.

We will say, though: given the fact that half the cast was obsessed with a Downton Abbey proxy in the episode, it seems a missed opportunity not to address that show's Sunday night competition, AMC's ratings juggernaut The Walking Dead.

How I Met Your Mother Steals Superman's "Floating Jor-El Head"