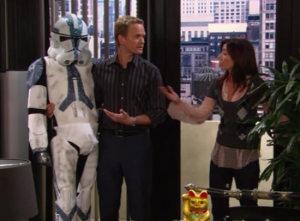 With the end of How I Met Your Mother coming after nine years, it's not surprising that some of its actors--especially Alyson Hannigan and Josh Radnor, neither of whom have a battery of other high-profile jobs waiting in the wings like Neil Patrick Harris, Jason Segel and Cobie Smulders do--are looking for their next big gig.

You'd think, that having starred on Buffy the Vampire Slayer for all that time and with Smulders appearing in the Avengers franchise, Hannigan would be reaching out to her former showrunner Joss Whedon about the potential for appearing in Agents of S.H.I.E.L.D. or a Marvel Studios movie. Instead, she's appealing to the grandmaster of Disney's other massive movie juggernaut, J.J. Abrams of Star Wars.

It makes a bit more sense in context, though; after Buffy went off the air, it was apparently Abrams who was the first showrunner to call Hannigan, expressing an interest in bringing her to TV for a series that ultimately never got produced but giving her encouragement that the market was hot for her.

"The day that the Entertainment Weekly cover came out—that was the day we all found out Buffy was over," Hannigan told EW in an interview discussing How I Met Your Mother. "I was devastated. I was just very shocked."

She added that on the same day, "I got an amazing phone call saying J. J. Abrams wants to meet with you and I was like, ‘Oh! Well this day just got a lot brighter.’ And I had a wonderful meeting with J.J. Abrams."

It didn't end up working out, since he wanted her for a one-hour drama and, coming off of a number of years on one, she preferred to move toward something a little less intense--but now that How I Met Your Mother is done, "I’m available for Star Wars just so you know!"