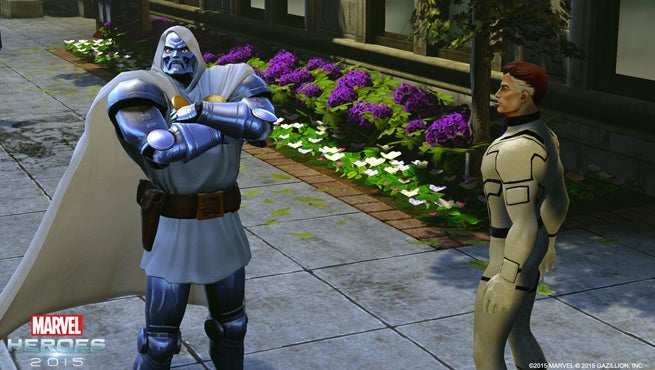 Over the last month and a half or so, I've covered Marvel Heroes 2015 at an increasing rate. Like any subject, I figured that if I'd be covering the game on a regular basis, I should do some proper research first.

When Marvel Heroes first launched two years ago (to the day! Happy Anniversary!), I played it for a little bit, but honestly just didn't really get into it. I wasn't playing a lot of PC games at the time, about 99% of my gaming being done on console. That's shifted a bit of late, and the addition of a nice, keypad-including Razer mouse certainly changed the way I approached the game now. Overall, I thought the game was interesting, but not so much that I was willing to dive in with daily play, multiple character juggling, and endless grinding – all of which are typically required of an MMO. Now, the game has evolved so much in two years that I do all of these things with aplomb, and find myself enjoying it more and more each day.

Jumping into Marvel Heroes again after a long hiatus, I may as well have been playing it for the first time. I decided, in fact, to treat it that way, temporarily abandoning Cable (one of my personal all-time favorite characters), and instead starting fresh with The Vision, one of the newest characters added to the game to celebrate his appearance in Marvel's Avengers: Age of Ultron. The pace of the action of the game was much faster than I remembered. Thanks to a month-long Avengers experience point boost and a couple of potions I had sitting in my long-forgotten inventory, leveling Vision was a breeze. I actually started from midway through the story (I had left off around chapter 4), but didn't find myself overwhelmed at all. After a quick trip to level ten (it took less than half an hour to get there), I found myself with a full bar of various powers, and a Vision who felt and acted like the badass I'd just seen in the movie and had read in the comics. His quick movement sees him phase into the ground at one point then reappear at another. He can fly, shoot beams from his eyes or his gem, and can even change density, becoming a melee-focused hyper-dense and strong character, or a range-focused but slightly less durable character. His ability to take control of robotic enemies like Sentinels, Doombots, and even Ultron copies made him even more fun – having a robotic minion at your side makes it much easier to go through the story, where you're mostly playing single-player (if you so choose), as opposed to the very team-focused side missions and raids.

I also appreciated the extra dialogue and banter when I called upon my team-up. I chose Quicksilver to tag along with The Vision both because he was also the newest, and because I know of their comic book history. Indeed, Quicksilver mentions Vision and Scarlet Witch's relationship – when he's not zipping around at superspeed. Quicksilver is handy to have around, and great at distracting enemies, but you will find yourself dismissing him anytime you're not actively fighting. Otherwise, he just keeps running, and the sound effect for that gets very irritating very quickly when not muffled by other battle sounds.

Progressing through the story was relatively easy; I really didn't find myself dying much or even using too many health potions. Each story level has several missions and instances – the latter of which are what you'd expect if you're an avid MMO'er – and while most fall into one of 3 or 4 categories, they keep things varied enough that you don't realize the repetition until you look back on what you've played. The amazing amount of characters, both playable and those you encounter, is a definite highlight. This game feels like you're traveling through a living, breathing Marvel Universe. As The Vision, I had temporary team-ups with Invisible Woman, Cyclops, Iron Man, Spider-Man, Captain America, Black Panther, Wolverine – the jump-in/jump-out nature of teaming up with other players lets you handle the storyline however you see fit. You'll notice as well that I listed Fantastic Four and X-Men characters in there – that's because Marvel Heroes has a full Marvel Universe license, not just for one set or another. Sure, that doesn't fit certain narratives going around the internet right now, but it's the facts. Dr. Doom is the main villain of the game, and there are full levels dedicated to the X-Men with the Purifiers, Juggernaut, the Brotherhood of Evil Mutants, and even Mr. Sinister and the Savage Land all coming into play – and that's just in the story. Of course there are also several Avengers-themed/focused missions, and plenty of enemies from Batroc to The Hood to Kingpin and beyond. The point here is that if you're a fan of any one corner of the Marvel Universe, you'll be happy. While there aren't many cosmic villains to speak of, you do have multiple Guardians of the Galaxy and even Nova and The Silver Surfer to play with, as well. 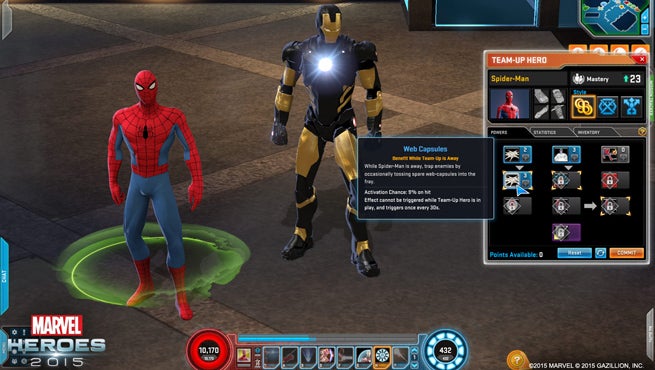 After shooting The Vision up to level 60 through a combination of playing the story (oh, quick digression: as soon as you have the chance to change to Heroic difficulty, do it. Same with Superheroic – it makes the game much more fun, as you'll just start doing one-hit kills on a consistent bases if you stay on Normal) and doing the Patrol side missions (basically you run around one of two set areas and kill endless enemies, fighting large groups of bosses in-between), I attempted my first raid. Well, it didn't go great, but that's actually part of the fun. A game like this, where you're ultra powerful after your first hour or so of playing, has to include some major challenges or you don't feel like you're really doing anything.

Suddenly, I realized I was totally hooked. I didn't want to just sit on one level 60 character, I wanted more. The game rewards you for playing with a variety of characters, as well; every character you get to level 25 gives you a boost (up to ten of them – if you have more, you can choose which ten you want applied and change on the fly) for your other characters, with a second boost given at level 50. With the Avengers month of XP boost focus, I quickly brought all the core avengers to 25, gaining those boosts, then started playing around quite a bit more. Captain Marvel (Carol Danvers is in the game originally as Ms. Marvel, but has a current modern-day Captain Marvel costume you can buy, as well as a male Mar-Vell costume that changes the voice and stance to male ones), Cyclops (definitely my second favorite of the bunch I've played so far), Rocket Raccoon, Dr. Strange; I've played a large variety now. It's large enough that I'm seeing some powers somewhat repeated, though tuned to those specific characters, but also that I'm seeing how much variety developer Gazillion has managed to keep even as they approach fifty playable characters.

So here we are, at the second anniversary, and they show no signs of slowing down. Adding a Dr. Doom heroic playable character is a big deal, since he is the primary villain, but the new characters (and skins) aren't even the biggest thing they've done here. What they continue to do is tune every aspect of the game, from individual characters to powers to enemy balance to new rewards and ways to play. Even this update includes the ability to try out 47 characters (all but Doom) for free up to level 10, new gifting options, a revamp of the Team-Up system/characters, and more. My experience with this game in the last month matches about 10% of my memory of playing it two years ago, and that's great. The good things I can remember are still there, and every other aspect is better.

To celebrate the two-year anniversary, Gazillion releases this new update, and is also hosting a Twitch livestream party at Twitch.tv/MarvelHeroes. There, you can tune in to see the new updates in action, or as they say "better yet," jump in and stream as well. If you stream and use the hashtag #PlayMarvelHeroes, you'll even get a shout-out from the Gazillion team.

Marvel Heroes 2015 is, now, an excellent game, and a great way for Marvel Fans to live in-universe (oh, they even explain the several hundred versions of the same character running around in the story). With enough character variety from all corners of the universe, easy ways to play with friends and strangers alike, and an ever-evolving backend that makes the game more fun each time, it's easy to recommend this free-to-play action-RPG for all comers.

The Flash: One Minute War Special #1 Review: Blink And You'll Miss It

Where Monsters Lie #1 Review: The HOA from Hell Arrives at Dark Horse Comics