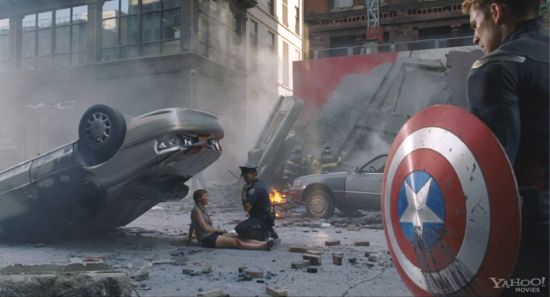 Joss Whedon’s first cut of The Avengers was reportedly three hours long, so a lot of scenes had to be deleted to make the movie short enough to hold the attention span of the movie-going masses. One of the scenes that wound up on the cutting room floor was a completely different opening sequence for the movie.

In a minute and a half of deleted footage revealed on Yahoo, we learn how The Avengers movie could have started. Instead of opening with the Tesseract and Loki, the deleted scene opens with footage of the damage in New York City after the alien attack. After seeing an unmasked Captain America standing in the midst of the destruction, we hear Agent Maria Hill say, “You want to know what went wrong? How this horror, this catastrophe could have been averted?”

The sequence also shows Agent Maria Hill being critical of Nick Fury’s leadership, which was a plot point not addressed in the film. The scene ends with the Hulk screaming. It’s an interesting twist on the opening, but I think Joss Whedon ultimately made the right choice in going with a different opening. The Avengers DVD and Blu-ray is set to be released in stores on September 25, 2011.

How The Avengers Movie Could Have Started