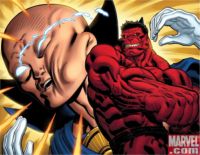 According to Marvel Comics, Hulk Issue #4 sold our at Diamond in less than twenty-four hours. Hulk #4 featured the battle between Hulk and Red Hulk. In order to meet demand for the issue, Marvel will be doing a second printing variant of the comic. On the variant, the interior art of Ed McGuinness will be featured on a new wraparound cover. The art will show the Red Hulk taking on the Watcher. Hulk is written by Jeph Loeb and drawn by Ed McGuinness. "Whahooo!" said Jeph Loeb. "Ed and I and Jason and Rich are thrilled that the newest Hulk in the marvel universe has made red turn to green for our retailer friends! And just in case anybody thinks we're slowing down, next up is the Red Hulk vs. THOR in Hulk 5 and then in Issue 6 it's GREEN VS. RED -- The Rematch of the Century! And we can promise you, there's more and more surprises galore!" Ed McGuinness said, "This book is about making impossible things happen....selling out again was not part of those plans!!! Thanks to all that continue to make this ride what it is. Excelsior!" The Hulk #4 second printing variant is scheduled to go on sale on July 30, 2008.

Hulk #4 To Get Second Printing Variant