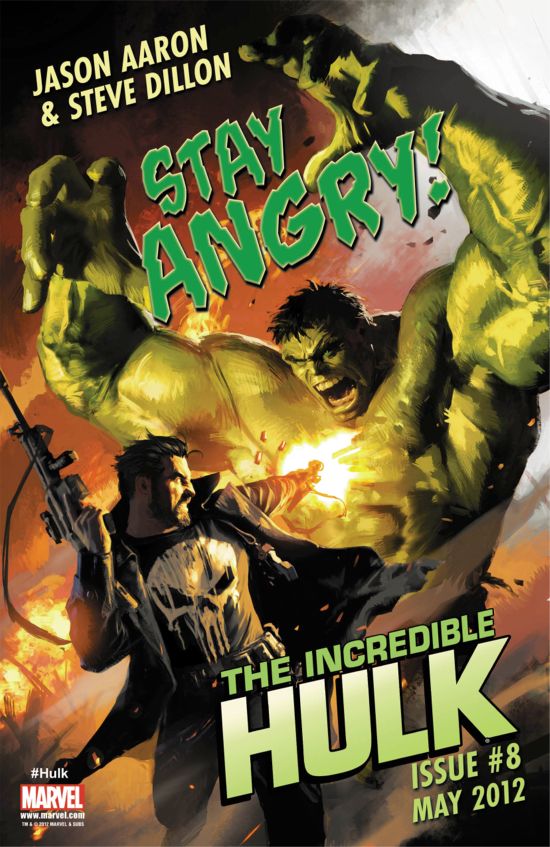 In Marvel's Next Big Thing conference call, the publisher announced an exciting new story arc for the Incredible Hulk. Starting with Incredible Hulk #8, a five issue story arc called "Stay Angry" will launch. The "Stay Angry" story arc will be written Jason Aaron with a different artist for each issue. The artwork for Incredible Hulk #8 will be done by former PunisherMAX artist Steve Dillon, while Pasqual Ferry is onboard for Incredible Hulk #9. The artists for the remaining three issues in the storyline have yet to be announced, but Jason Aaron revealed they would be artists that he has not worked with before. Aaron said, "Stay Angry flows out of the end of Hulk vs Banner, which has a big, shock ending that changes Hulk's status quo and dynamic again. All I can really say is this is a five-issue story with each issue relatively self-contained for the most part, done by a different artist and in a different location." The five-part "Stay Angry" story will feature The Punisher, Wolverine, and Kraven the Hunter as guest stars. Incredible Hulk #8 will feature The Punisher in a story set in Mexico. In regards to the Wolverine appearance, Aaron said, "With Wolverine you can expect claws popping and a big fight. It will be a different kind of role for him and a different kind of Hulk story." In regards to the Kraven the Hunter appearance, Aaron said, "Kraven is a character I have never written but always loved. Kraven's Last Hunt is on my desert island list of Marvel comics. I remember being at the retreat when it was decided Kraven was coming back and being both excited and terrified. I'm glad I get to write him. His mindset is right in line with how it has been since he came back." Aaron compared "Stay Angry" to "imagine if you took the movie Crank, stuck The Hulk in it, and then every five minutes took out a segment." Aaron also promised, "There will be Atlantean mobsters, Russian super soldiers and lots of Big Foots." Incredible Hulk #8 is scheduled to arrive in comic book stores in May.

Hulk To Stay Angry With Help Of Punisher, Wolverine, And Kraven the Hunter