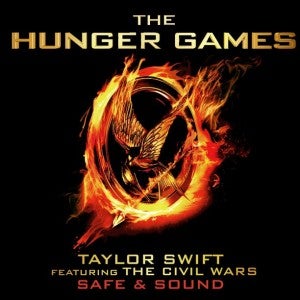 "Eyes Open," Taylor Swift's second single from the soundtrack for the upcoming film version of The Hunger Games, debuted last night at a concert in Auckland, New Zealand. The singer is quoted by The Hollywood Reporter as telling the audience, "I was lucky enough to have two songs on that soundtrack, so I'm really excited about that," before launching into an acoustic version of the song. "Eyes Open" will join Swift's own "Safe & Sound" as well as tracks by The Arcade Fire, Miranda Lambert and others on the soundtrack. As with any concert these days, there are a few dozen shaky cell phone videos on YouTube. One of them is embedded below, with pretty respectable audio quality for that sort of thing, or you hardcore Taylor Swift fans can pore over the YouTube search results to find the one you like best.