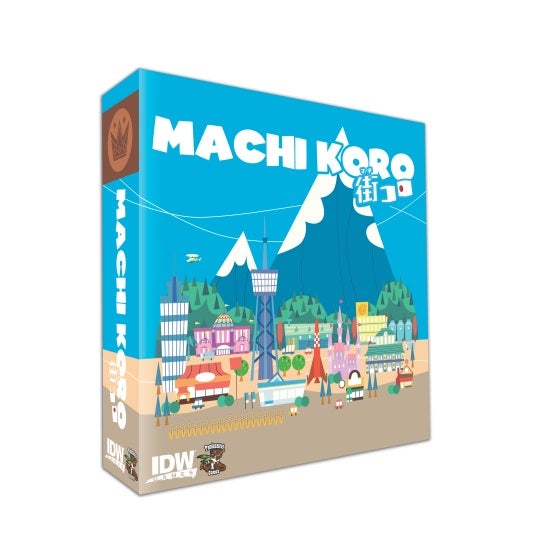 IDW Publishing has announced, in partnership with Pandasaurus, that it will be publishing the international bestselling boxed card game, Machi Koro, in the United States. This will be the first time that Machi Koro, originally designed and released in Japan, has been released in North America. The game has players competing to build their small towns into giant metropolises. "This is absolutely one of the most addictive games I've ever played," said Molly Wardlaw of Pandasaurus Games "Machi Koro is a table top gamer's dream.  Machi Koro is so infectiously fun because it combines strategy in a small fast-paced experience.  This is a game that could easily be played with non-gamers, but has enough depth and strategy to satiate the most dedicated table top fanatics. This is the epitome of the 'let's play just one more round' experience." Machi Koro can be played with up to three players in 30-minute dice rolling, income collecting and stealing, public works building sessions. "Machi Koro is a game that's been whispered about in gaming halls for a long time," said IDW Director of Business Development Jerry Bennington. "Any convention it's been at, players have swarmed booths, snapping up copies, even if they had to translate rules and cards. We're excited to be introducing ourselves at GAMA with a game and giveaway this prestigious." Machi Koro will be priced for retail at $29.99. Machi Koro is currently on display at the GAMA trade show and the first 100 attendees to participate in a demo of the game will walk away with a free promo copy. Machi Koro is expected to be released during the holiday season.

IDW Games And Pandasaurus Bringing Machi Koro To The U.S.

My Hero Academia Revives SPOILER In a Wartime Twist

Chainsaw Man Gives Us a First Look at the Ghost Devil