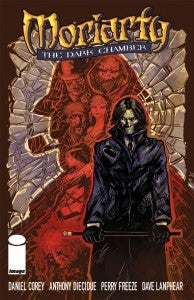 Moriarty is a science fiction adventure comic book series from Image Comics. The comic features Professor James Moriarty, arch nemesis of Sherlock Holmes. Moriarty is billed as the original supervillain, and the series is set in a London where Sherlock Holmes died twenty years ago.

While taking place in the streets of London and the British countryside, Moriarty offers up a world of underground lairs and superscience labs. In the first storyline, Professor James Moriarty is blackmailed into trying to find Holmes' long-lost brother, Mycroft. The task is not simple as a psychic box and a new villain enter the picture.

For those who haven’t been picking up the series or just want everything collected in one nice package, Image Comics has announced the first trade paperback volume of Moriarty. The trade paperback will be entitled Moriarty: The Dark Chamber and will collect the first four issues of the series.

Moriarty is written by Daniel Corey with art by Anthony Diecidue, colors by Perry Freeze and letters and design by Dave Lanphear. The Moriarty: The Dark Chamber trade paperback is scheduled to arrive in comic book stores on September 14, 2011.