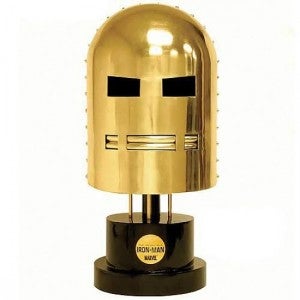 In an interview with GQ, Iron Man 3 star Robert Downey Jr. confirmed that he made $50 million from appearing in The Avengers, because his contract gives him a percentage of the revenue. So what has Robert Downey Jr. done with his new found wealth?

Well, according to the same GQ interviw, Robert Downey Jr. also carries around a miniature brown leather suitcase, and one of the things inside that suitcase is a solid-gold Iron Man helmet head.

Robert Downey Jr. commissioned a jeweler to make a bunch of solid-gold Iron Man helmet heads, but they weren't all for him. He actually had the heads made as gifts for crew members when Iron Man 3 finished shooting. He only kept one of the solid-gold heads for himself.

The interviewer doesn't note the size of the heads, but we're guessing they were charm-size heads. Even with $50 million in the bank, it would probably be a stretch to buy full-size solid-gold Iron Man helmets for a production crew.

Iron Man 3 is scheduled to open in theaters in the United States on May 3, 2013.