China's Global Times has just published an article questioning whether Iron Man 3 is "really" co-produced with China. In spite of a big promotional push early on boasting of the relationship and promising a close working relationship with the U.S.'s most significant industrial partner.

In spite of a plot that reportedly involves a Chinese crime syndicate and has filmed on Chinese restaurant sets, though, the only actor who seems to be playing a major role is Wang Xueqi--if you want to call it "major," given that there are so many villains in this movie that one more (excepting The Mandarin himself) is arguably not a huge role. 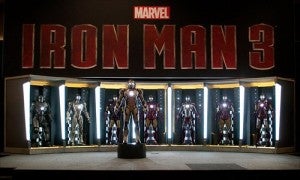 Additionally, ComicBook.com was the first to report during San Diego Comic-Con International in July that neither director Shane Black nor any of the principal cast of Iron Man 3 headed to China for filming, with the people behind the movie comparing the picture's Chinese sequences to the Monte Carlo race track scene from Iron Man 2.

“I assume that when the plates crew goes over to China to film the plates while I’m standing by my swimming pool, that it will go really well,” joked Black in response to a question about shooting overseas.

According to the Global Times report, the guidelines for what exactly constitutes a co-production are toughening, with recently-completed films like Looper and The Expendables 2 appearing not to qualify even though they were supposed to have done so. The article says that there are three principal elements that must be satisfied in order to gain the "co-produced" credit: the film must be financed at least 1/3 by China or Chinese companies; at least one major role must be filled by a Chinese performer; and at least one major scene must be filmed there.

"Such a big budget Hollywood film needs an investment of over $200 million," film critic Wang Siwei told the Global Times. "One third of that is $80 million, or 500 million yuan. For Chinese investors, this is an extreme number."

Whether filming background photography in China and then digitally inserting actors into it via green screen constitutes "filming" a major scene in China remains to be seen, but based on the remarks made at Comic-Con, it seems as though that's what Black and Marvel Studios president Kevin Feige have in mind.

There's also a promotional image contained within the Chinese report that had managed to slip past us in the past, so check that out below--it appears as though it may actually have been taken at the Marvel stage at Comic-Con but it's hard to say for sure.