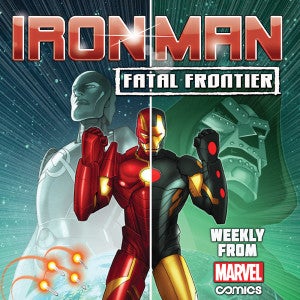 Just hours after Marvel released the first monthly Infinite Comics series, Wolverine: Tokyo's Most Wanted, the publisher announced today that the next such series, launching in October, will also be tracking the activities of one of the publisher's Hollywood stars. Iron Man: Fatal Frontier will hit the virtual shelves this fall from the creative team of Kieron Gillen, Al Ewing and Lan Medina. Marvel says the series will "launch Tony Stark into the cold depths of space for a star-spanning adventure that only an Infinite Comic could contain! When an powerful new element is discovered beneath the moon's surface, a cosmic gold rush breaks out between the Marvel Universe's greatest factions and foes—including the Master of Evil himself, Doctor Doom." 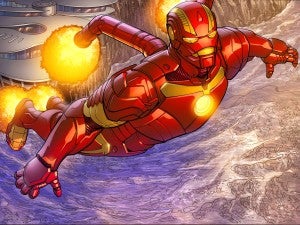 Marvel Senior Editor Mark Paniccia promises, "Something big is going to happen in Iron Man: Fatal Frontier that will impact Tony in moving forward and Tony may never be the same." "When it comes to technology, Iron Man is always three steps ahead of world," said David Gabriel SVP of Publishing, Print & Digital Sales.  "With all the technological innovations that the Infinite Comics hold, Tony will feel right at home in a comic that's light years ahead of anything else."