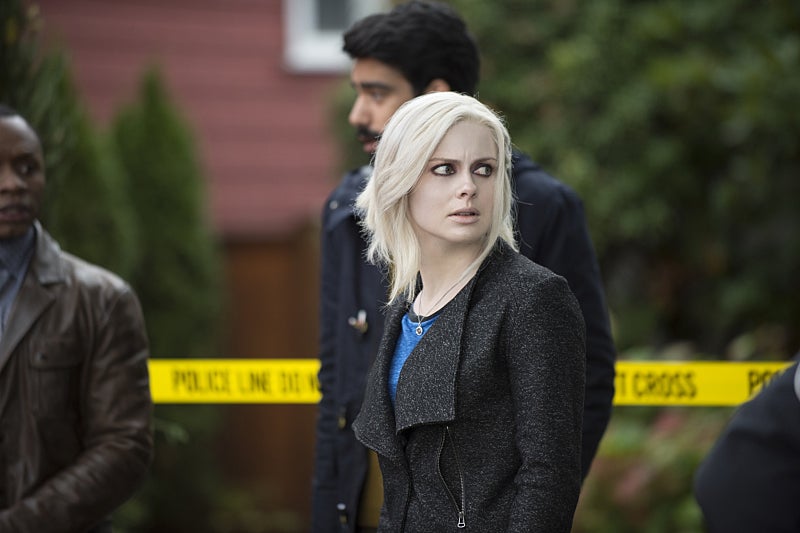 The episode opens on Major lying on the slab in the morgue. Ravi is stitching up his face following the attack. He tells them about finding "the candyman," and Jerome's high-tops. While he's talking, they get another call for a body.

At Jackie's apartment, she pounces when a delivery boy comes, bringing her some food...including something that's secretly got brains in it. When the brain food isn't in the bag, she goes full-on zombie and kills him.

At the scene of the death, Clive, Ravi and Liv find a badly decomposing body belonging to a shut-in who had gone weeks without anyone noticing he was dead. He fell on his stairs, spilled a drink, and his basement has got almost as much decaying junk food as it does computers.

Outside in a crowd of gawkers, one particular man starts taking selfies.

At the restaurant, Blaine get a call from Jackie; she tells him her delivery never came. He offers to bring her something, but she declines.

At the morgue, they find out that the dead man was a well-known Internet troll and hacker, who had dozens of death threats. All signs point toward murder, and Liv dreads having to eat some of the disgusting, decomposing brain. She does, blending it into a milk shake. Shortly after, she has a craving for a doughnut that Ravi has left on the table. Liv has a vision: the victim had a severe allergic reaction after eating a doughnut and had to use an epi pen to save his life. Toxicology found no traces of foods likely to set off an allergic reaction, though.

At the shelter, Major enters a group session already in progress. The other employee tells him that he's not allowed to come to group looking all banged up.

At the police department, Liv starts to feel weird, but it passes. In conversation with Clive, she realizes that the victim had received a birthday card even though it wasn't close to his birthday, and they deduce that some confetti that popped out of it and hit him in the eye may have contained peanut powder, which killed him.

That evening, Liv readies for her date while reflecting on how amazing Major was. As soon as she leaves her apartment, though, she starts to have an anxiety attack and heads back in. She calls Lowell to tell his machine what happened.

At the morgue, Clive drops off another body -- it's a street kid who was killed before being left in the woods and likely mauled by a bear. But he has hundreds of dollars worth of fancy food partially digested in his stomach.

At Liv's apartment, Ravi drops off the troll's laptop, and she can get in because she still has his muscle memory to replicate the password. She opens the machine and it's an MMORPG. She discovers that her brain donor had eradicated an enemy's troops en masse recently and that enemy had claimed to have killed him afterwards. Ravi heads home to enter the game and help Liv impersonate the hacker.

At the shelter, Major hears Jerome's voice and thinks for a moment that he's back -- but it's another kid, watching old skate videos. Major tells him to keep playing them and starts watching the crowd at the skate park.

Back at home, Liv is managing a video game attack. Her mother comes to see her, and is dismayed to see that the most engaged she's seen her in ages is in a video game. Finally, they find the archenemy they've been looking for and he insists that he killed "Sim Reaper," the hacker. Liv silences her public microphone and talks to him one-on-one, saying that she's with the police and wants to talk to him about the murder of Simon Cutler. The guy calls her on video and it's a teenage boy.

The kid is an unlikely suspect; he's fourteen and lives in Manhattan.

While Liv is talking to Ravi on Skype, Lowell comes to offer her anti-anxiety meds. She invites him in for a drink. She admits that she's not over Major yet, and he offers to talk to her. They share ex stories.

At their apartment, Major shows Ravi a skate park video. Major keeps seeing the guy who beat him up in various videos but can't get a good shot of him. He pops a stitch and goes to see Liv -- but not before Ravi has to warn him that she's not alone.

Liv and Lowell share stories about how they became zombies; he woke up in a drunk tank and has no recollection of how he became a zombie. He had to give up his career as a musician performing on stage because the pre-show adrenaline rush gave him the full-on zombies. She tells him how sorry she is to hear that, and he takes that as a sign and tries to kiss her. She backs off, and then he's trying to recover from the awkwardness by making small talk, he sees something on Simon's laptop; it's a lead in the case, having to do with doughnuts, so she has to go to work and he sees himself out.

At Blaine's restaurant, Clive shows up to ask him if he's seen a kid in a picture; it's the delivery boy who Jackie killed, who turned out to be the body mauled by the bear postmortem. He shows him a photo, which Blaine says he doesn't recognize but asks Clive to leave for the other employees because his restaurant was one of the only places the kid could have gotten the food in his stomach. Before he leaves, there's a loud bang in the back and Clive is suspicious of Blaine. Blaine offers to give him a tour of the place, trying to lure him to the back room, but Liv calls with a lead.

At the police department, a couple whose doughnut shop was ruined by a torrent of negative online publicity after Sim Reaper almost died due to a peanut allergy are called in for questioning, but point out that they didn't know who "Sim Reaper" actually was until he died.

They realize, though, that there must have been other doughnut shops that delivered to Cutler's neighborhood. Clive takes off to investigate.

Blaine heads to Jackie's, ringing her bell, which she had told him was broken when she tried to discourage him coming by to see her. Blaine tells her that today a cop had come by looking for information about his dead delivery boy, and then kills Jackie with an electric screwdriver he'd brought "to fix the bell."

The second doughnut shop on the list seems suspect; they won't give Clive a list of employees or any information without a warrant. Liv uses Cutler's skills to hack into their records, but they're so poorly organized that it still takes forever to get any idea of who the killer might be.

She gets a vision of the moment Cutler died; before he dropped it, tripped over it and broke the chip, the birthday card that killed him had played "Ring Around the Rosie." Liv provides Clive with a photo of an employee whose last name was Posey, thinking that might be their guy, trying to taunt the victim.

Turns out Posey's sister was a customer service rep who had posted audio of Cutler abusing her, and he had retaliated by ruining her life with a series of increasingly terrible hacks. She eventually killed herself, and so her brother took the doughnut job to find and kill Cutler.

Having found the killer, Liv heads over to find Lowell and kisses him. Major found a clear shot of the Candyman, finally -- with Blaine. She figures out what Blaine is doing, and that he's killing all those missing kids from the skate park.

At Blaine's restaurant, Liv's mom stops in to buy some to-go food and picks up an application "for my son."