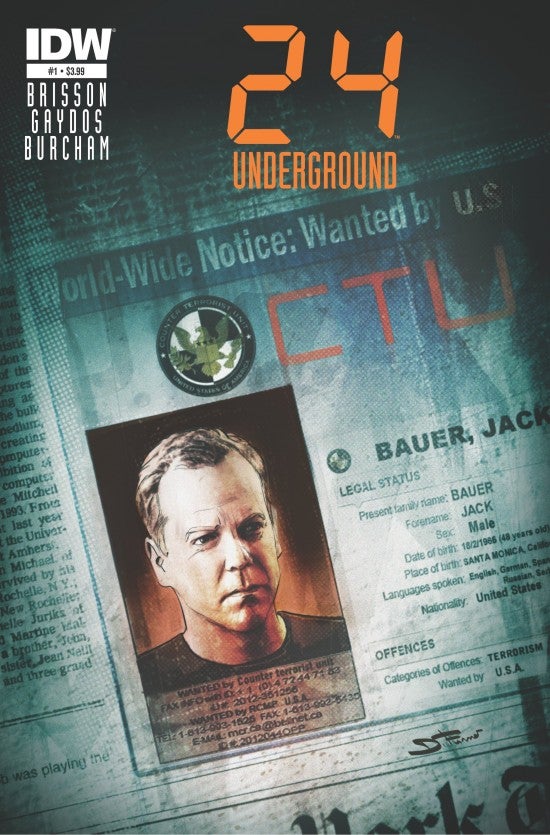 One of the biggest pieces of TV news in recent months was the revelation that 24 is finally returning to the small screen in the form of an event miniseries titled 24: Live Another Day.

Ahead of the May debut of the show, IDW Publishing and Twentieth Century Fox Consumer Products have partnered to launch 24: Underground, a new comic book series that follows Jack Bauer, picking up where the final season of the hit television show left off. The series debuts next month, and will offer an expansive look at the events leading straight into Live Another Day.

Ushering Bauer into his newest adventure will be writer Ed Brisson and former Alias and Manhunter artist Michael Gaydos.

“Ed burst onto the comics scene with the sci-fi thriller Comeback, which was heavy on plot and adventure, a style that fits nicely with an established property such as 24,” editor Denton J. Tipton says. “We’ve paired the rising star with veteran artist Michael Gaydos, whose draftsmanship and storytelling skills are second to none. Buckle up for a high-octane tale of Jack Bauer’s missing years!”

“24 was one of IDW’s earliest successes with licensed comics,” says Greg Goldstein, IDW President and Chief Operating Officer. “And the show’s stature has grown immensely since then. Returning to the world of 24 in comics, in conjunction with this highly anticipated return to TV, makes perfect sense.”

Starring Kiefer Sutherland, 24 enjoyed a critically- and commercially-successful run on FOX, winning Emmy Awards, Golden Globe Awards and Screen Actors Guild Awards. Thanks to a vocal and loyal fan base, the show became one of the most successful espionage dramas ever on TV and since the minute it left the air, pressure has been on the producers to bring it back.

Jack Bauer is A Wanted Terrorist in 24: Live Another Day Prequel "Underground" From IDW Publishing