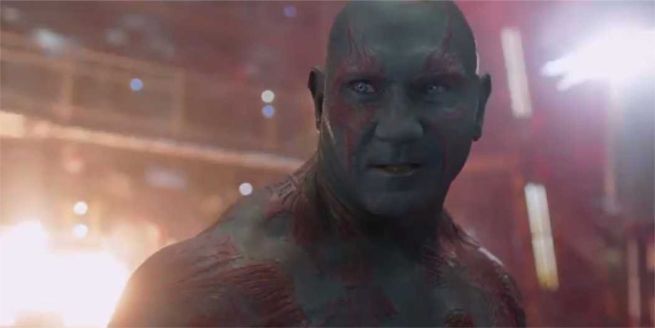 James Gunn has revealed an extended version of Guardians of the Galaxy's infamous "Thesaurus joke" made at Drax's expense early in the film.

While reminiscing about Guardians of the Galaxy on his Facebook page, as he's often done lately, the director remembered the Drax joke as it was originally written, and shared it with fans.

DRAX : Do not ever call me a thesaurus. Ronan killed my family. A thesaurus has never known such pain.

In the film's final version, Drax responded with "Don't ever call me a Thesaurus" and left it at that. We figured Gunn shortened the line to make it less of a buzzkill, but Gunn explained why he abbreviated the joke post's comments later on.

"I think we were just making things move faster, and we had a bunch of good jokes in that section. It was making them all work together. He was also saying it BEFORE Rocket explained how he didn't understand metaphors, so it wasn't as funny."

And there you have it—A bonus scene and piece of Guardians of the Galaxy commentary that didn't even make it onto the film's Blu-Ray.

Would you have liked to hear Drax's line as it was originally intended? Sound off in the comments below.