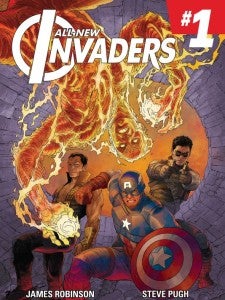 Captain America, Bucky (now called The Winter Soldier), the Golden Age Human Torch and Namor the Sub-Mariner will come together again as The Invaders, but this time it'll be space invaders rather than the more grounded and real-world threat of fascism that they'll be facing off against in a new series from former Earth 2 writer James Robinson and Animal Man artist Steve Pugh.

That's the All-New Invaders to you, part of the All-New Marvel NOW launch announced this morning.

According to USA Today, the team will face off against the Kree Empire, who seek to rediscover a device that can control gods and create an unstoppable army.

"They answered America's call, went to war against the Nazi menace and fought side by side. These guys were brothers-in-arms," Robinson told the newspaper of the team. "As they move into more modern dramas, that link is a link you just can't undo. That will hopefully be the visceral element of this books' identity that will set it apart from the Avengers and X-Men."

Ironically, Robinson took a team that had a long-established history as World War II heroes (the Justice Society of America) and brought them to the modern day as part of DC's New 52 initiative. In that case, though, their history wasn't acknowledged and instead the book was essentially rebooted on an alternate Earth in the present.

The Invaders, who haven't had their own title in quite some time and are best known for their World War II adventures, nevertheless appeared fairly recently in flashback in Captain America and Bucky stories from writers Ed Brubaker and Marc Andreyko.