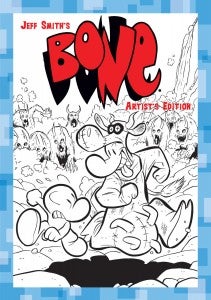 Jeff Smith's Bone, one of the most critically-acclaimed and best-selling comics of the last 20 years, will come to IDW Publishing's Artist Edition line starting in the fall with Jeff Smith's Bone Artist's Edition: The Great Cow Race. The line of oversized hardcovers, which reproduces the original art in its original size in an attempt to come as close as possible to actually holding the pages, are award-winners and fan-favorites...and IDW's Scott Dunbier says he's been chasing Bone for a while. "Jeff Smith's Bone is a classic comic in the tradition of all the greats. It's in the tradition of Carl Barks, Walt Kelly and classic Mickey Mouse. There's something timeless about Bone. The charm, the execution; it's one of those strips that transcends regular comics," Dunbier told CBR. The series, which was printed as 55 irregularly published issues from Smith's Cartoon Books label and Image Comics, has been reprinted in a number of different formats over the years, including best-selling colorized versions through Scholastic that have brought the all-ages series to students and educators who might not normally read comics. "Bone was always on my list of projects I wanted to do as an Artist's Edition. Jeff and Vijaya [Iyer] from Cartoon Books and I have been talking about this for several years," said Dunbier. "In the beginning, when we first started talking about this, the timing wasn't exactly right because they had a number of projects going, but finally everything sort of aligned and we worked out a deal. I'm thrilled, I couldn't be happier. Doing Bone is just one of those rare treats." Other upcoming Artist's Editions include Will Eisner's The Spirit and John Byrne's Fantastic Four.