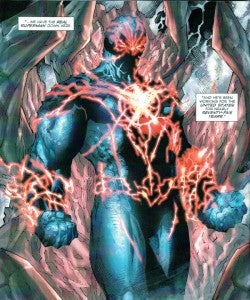 During an interview this morning with Bloomberg TV, DC Comics co-publishers Jim Lee and Dan DiDio discussed the present and future of Superman, the new villain introduced in this week's Superman Unchained #1 and the importance of Man of Steel as the character's 75th anniversary celebration rolls on this year. The pair also revealed that Superman Unchained's mystery villain, the character pictured at left and responsible for acts of government-sponsored destruction stretching back to World War II, is a new villain named Wraith, rather than a reimagined version of an existing DC Universe character for the New 52, as some had speculated. You can see the video embedded below, along with the transcript below courtesy Bloomberg Television. On the evolution of Superman: Dan Didio: He was first created in 1938 and he had a very particular appeal at that time [to uplift the population]. As we say, Superman is the ultimate immigrant story. He comes in from another planet with no parents, learns the American life, learns the ideals and wants to come out and help everyone he comes in contact with. At the core of it resonates so much that as we change the world around Superman, we find ways to contemporize him and really play into the ideals and the expectations of what a hero is today. On what he keeps in mind as he tries to reinvent the Superhero: Jim Lee: The really cool think about Superman is even though he has changed he has stayed the same, at his core, superhero with all the greatest powers you would expect but he has tremendous humility and a moral compass. So that part of him has not changed and that's why he continues to be an inspiration and an icon. 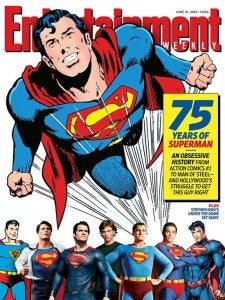 On what he would like to achieve with the new Superman series:Lee: I was working with Scott Snyder and we said if we could only tell one Superman story, this is what we would tell. If you only have one shot you want to do all the classic element of superman. We have lots in there. We have Lois. We have Lex Luthor doing diabolical things. There is a new villain named Wraith. I think we can reveal that now. That is an exclusive. Scott will hate me for that [Laughter]. We are adding things to his mythology and that's how you keep him fresh and relevant. On whether digital or physical comic book consumption is more popular: DiDio: There is great symbiosis between the two, it's not one cannibalizing the other. They are really building on together. We are also growing in the bookstore market. We do collections. We see ways to reach people in any channel possible. Lee: Part of the strategy is to continually innovate in print and digitally. The first issue of Superman Unchained there is a poster that is part of the story.  It is interactive in a physical sense. The image is a panel within the story. Then you turn the poster to the other side that is page four or five of the story, and it is a page six. You fold it back up, and you keep reading. That is something when you read on the iPad, it will show up as a regular splash page so that kind of experience is something you could only get in the print product. On whether "Man of Steel" the Movie helps moving the brand: Lee: Sure. It is a year-long celebration of the character. Having a fantastic movie like Man of Steel come out is an awesome event. We are doing a lot of things in publishing digital comics. Everything you can think of we are doing with superman, so we are excited with the movie… We are sworn to secrecy. All I can say is it was a great movie. DiDio: Anything that draws attention to our characters and our medium. It helps to reinvigorate everything we are doing. You have to go back to the sensibility that comic book storytelling we are doing. You have to go back to the sensibility that comic book storytelling is one of the first pure American art forms. It was something created in the United States. It is something we hold dear to us. The fact that all of this material spins out from this course material gives us a sense of pride.