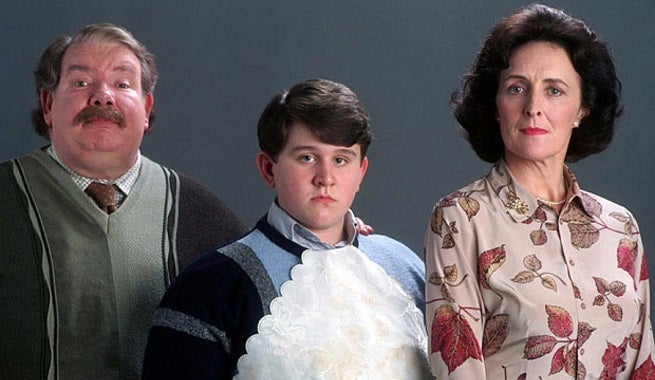 Ever wonder what it was that the Dursleys had against their nephew, Harry? In a new update to the Pottermore website, author J.K. Rowling sheds a little light on Harry Potter’s least loved relations.

Released on Tuesday, the update includes a look into Vernon and Petunia Dursley’s history, including a first meeting between the Potters, James and Lily, and the Dursleys. The meeting goes poorly, with Vernon patronizing James by assuming that wizards must live off of some kind of government welfare. James is simply bemused by the matter, but when he tries to explain Gringotts to Vernon he only becomes angry.

Lily was excluded from Petunia’s wedding because the bride didn’t want to risk being upstaged by her sister’s magical talents. The two families had no contact after that, besides a note from Lily informing Petunia of Harry’s birth, which was quickly hidden away.

Rowling explains that the reason Vernon treated Harry poorly “stems in part, like Severus Snape’s, from Harry’s close resemblance to the father they both so disliked.”

While Rowling had considered redeeming Petunia in the final book of the Harry Potter series, she ultimately decided that Petunia needed to stay true to her unlikable core. Petunia was unable to let go of her resentment and had nothing to say during her final goodbye with her nephew.

While Harry’s story is over, Rowling is returning to the “Wizarding World” for the upcoming film Fantastic Beast and Where to Find Them. The creator is writing the script for the film, which will be directed by Harry Potter movie veteran David Yates and star Eddie Redmayne.

Check out when Fantastic Beasts and Where to Find Them and other movies are coming out in ComicBook.com's Movie Release Schedule.

Will There Be a WandaVision Season 2?

Snowpiercer Season 2 Review: Weirder, Wilder, and More Relevant Than Ever