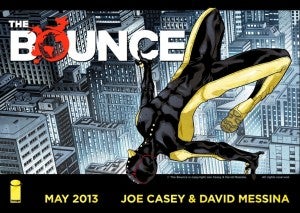 NOTE: A previous version of this story and art said that the series would launch in April. Image Comics has since issued a correction.

In May, Image Comics will roll out The Bounce, a new superhero comic from Godland's Joe Casey and artist David Messina. So far, little is known about the title, outside of this teaser image, just released to the comics press. Image's April solicitations should come along soon and provide some more information, but in the meantime we'll just have to trust Casey, who has asserted in interviews that this title is so crazy it will make his previous work look tame.

Joe Casey's Bounce Debuts in May From Image Comics