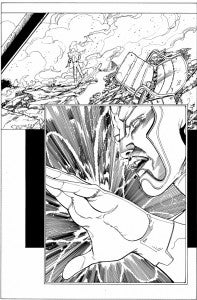 DC Comics, over at their blog The Source, has confirmed what Bleeding Cool reported in early October: Co-writer Gail Simone has left The Fury of Firestorm: The Nuclear Men with March's #7. She will be replaced as co-writer by Joe Harris, and Ethan Van Sciver (who currently co-writes the book and draws covers) will take over the art chores for Harris's first two issues. Regular series artist Yildray Sinclair isn't going anywhere, though, and will return with #9. This makes Simone the second writer in less than two days to leave their books after six issues, a number that's inflated further when you consider previously-announced creative changes. George Pérez is leaving Superman after #6 to make room for Dan Jurgens and Keith Giffen, who are in turn leaving Green Arrow with #6 to make way for Ann Nocenti. Ron Marz is off Voodoo as well, replaced by Joshua Williamson. DC has stated repeatedly that titles and creative teams would be re-evaluated after six issues, and while many readers took this to mean books could be canceled quickly, so far it's just creative changes which are happening. Of course, the massive sales success of the company's New 52 initiative may have played a role in that, keeping every title well above previous cancellation thresholds so far. Bleeding Cool first reported rumors that Simone was leaving The Fury of Firestorm behind shortly before the start of the New York Comic Con. According to those initial reports, the writer and DC editorial were unable to resolve issues surrounding the title. Whether those rumors are true or not will likely never be completely revealed, but it's noteworthy that even back in October, the rumor site was suggesting that Simone's departure from the title would not affect her other major DC project, the highly-publicized and bestselling Batgirl relaunch. Simone, usually quite outspoken, did not refute the October reports and has yet to comment on today's announcement via Twitter.