Best-selling writer Joe Keatinge announced today that he will launch a new Image Comics series titled Shutter in April with artist Leila Del Duca. "It's something that's been kicking around in my head for a long time," Keatinge told the audience in San Francisco.. "I've always loved adventure fiction." The series will feature star Kate Christopher, "from a long line of adventurers," Keatinge said, and while it started grounded, the development process changed once he realized what Del Duca could illustrate. 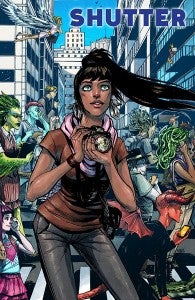 Kate's character can be described as a contemporary Indiana Jones. "We're looking at the 21st Century, where it's at and where it's going, and considering what the Adventurer for its time might be like—what would Indiana Jones be like if created in 2014? What's after Lara Croft?" said Keatinge.  "We're at a much different time than the pulps and serial Indiana Jones and, to an extent, Lara Croft, were rooted in—information from all remote corners of the world comes from great ease, where we're more knowledgeable about other cultures, where technology enables us to access we could only dream about. Where do you go from there?" Leila del Duca was brought on for Shutter's art by Keatinge himself. "Joe Keatinge was the first industry name who showed real interest in my work and I really enjoyed his writing on Glory and Hell Yeah," del Duca explained. "When he pitched Shutter to me, I was ecstatic about the concept. Joe's imagination is incredible and he's writing me a script perfect for my interests, with lush visuals and diverse subject matter." He said at the Expo that he threw everything into it, including "minotaurs on the subway."