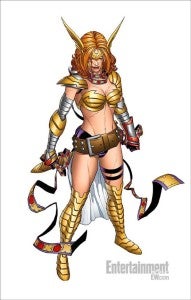 It's June 19, and you know what that means--Age of Ultron #10, with the "unguessable" ending that loads of people have guessed--is here. There's a lot to talk about, but one of the two big splashy endings features, as we all knew it would, the first appearance of Angela in the Marvel Universe. But...why? She doesn't really play directly into the A-plot. She could easily have made her first appearance elsewhere. Well, in the Marvel AR features attached to the page, here's what Marvel Chief Creative Office Joe Quesada has to say:

So the idea of inserting Angela into the Age of Ultron really came out of long conversations between Brian Bendis, myself, our editorial group when it came to all these sort of earth-shattering changes that might occur after that series. We were looking for a way to bring Angela into the Marvel Universe. We really weren't sure when and where it was going to happen. But then we started thinking about Age of Ultron and thought that there might be a way that her storyline dovetails in with AoU and would sort of unleash this character into the Marvel Universe. So it really was kismet in a lot of ways and the timing worked out beautifully and it helped out Brian a lot because it wasn't something he had immediately at the end of his story but it was something that we did add in later on and beautifully. So from that point on she moves on and through the Marvel Universe and it's going to be pretty historic.

Joe Quesada explains How Angela Fits Into the Age of Ultron