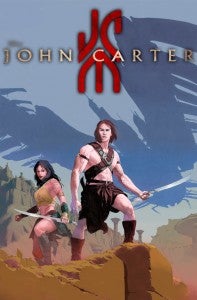 Leading up to the release on Friday of John Carter, Disney-owned Marvel Comics has published a four-issue miniseries by fan-favorite creators Peter David and Luke Ross which tells the story of the run-up to the film.

In John Carter: World of Mars, David and Ross craft a story that serves to establish a gritty, dangerous world of Mars and a badass Dejah Thoris, a heroine in her own right that helps to lift the character beyond the typical adventure-movie princess. To all of those who were wondering where the strong, well-developed female characters in comics are, here's a great graphic novel to hand to the teenage girl on your Christmas list. Just be sure she doesn't confuse it with those other Dejah Thoris comics...!

Even so, it's really the story of Sab Than, the Prince of Zodanga, who rises to power after a series-long, fruitless pursuit of Dejah Thoris during which he repeatedly catches up with the Princess of Helium only to be bested by her in combat and/or evaded, again and again. It's a frustrating journey for Sab Than, to be sure, but it's ironically not the thing that drives him to the brink and delivers him into the course of the film's story as the dangerous villain he is by the time John Carter of Earth arrives.

He's a compelling antagonist because it's hard to call him a villain. Minor tweaks to this miniseries and he could have been a hero, his final act of madness spun as a crowning moment of awesome. David plays the scene perfectly so that, even as readers know what it means for the future of the characters, you find yourself rooting for him a little bit.

The dialogue works well, too--there's a kind of regal, old-school feeling to it that makes sense coming out of the mouths of characters created by Tarzan mastermind Edgar Rice Burroughs, but David (who has always had a hell of an ear for dialogue) updates it somehow without necessarily feeling like that's what he's done. There's something unexplainable about how it works, but it does, and well.

Ross's focus is on storytelling and action, and feels more like a Vertigo title than the slick, Marvel movie tie-in that you expect when you first crack an issue. It is, in fact, a bit reminiscent of Ross's work with Ron Marz on Samurai: Heaven and Earth, except that this has an even less "polished" look than did Shiro's 18th Century story. The look both fights a bit with the source material (as these are, after all, characters who have been designed with a sleekly-animated big-budget film in mind) and fits it perfectly, giving the book an edge and a sense of the barbaric and foreboding that--to pick on another film franchise for a minute--the Star Wars prequels lacked in their enthusiasm to show off how much cool stuff they could make.

The characters themselves are refreshingly different from previous interpretations of the John Carter mythos in comics, and that's not all to be laid at the feet of the Disney animators who did the character turnarounds. The way they move and interact on the page is different from anything we've seen yet in promotional materials for the film, with combat sequences that have a choppy, brutal sense of motion that brings to mind something more like Psycho than anything we've seen in John Carter director Andrew Stanton's previous work.

As with any licensed property, and especially any film adaptation, the book isn't perfect--but in a world of decompressed storytelling, this is a tale where events often jump forward in such a way that you wonder whether the four-issue miniseries may have benefited from another issue or two, and whenever you're left wishing there were more, the creators have done something right. This book is good. And not just "good, for a movie tie-in." It's a really entertaining comic.

How Masters Of The Universe Revelation Changes The World of Eternia