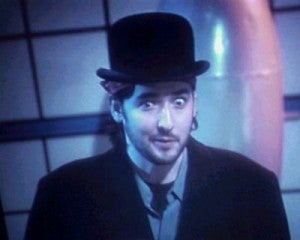 John Cusack will reportedly play the lead in a film adaptation of Cell, Stephen King's novel about a zombie apocalypse brought on by cell phone use.

King and The Last House on the Left writer Adam Alleca will write the script. Richard Saperstein, who produced the last King-Cusack collaboration, 1408, will produce Cell as well.

“I’m thrilled to be working with Stephen and John again,” Saperstein told Screen Daily. “Cell is an intelligent psychological thriller that delivers on both a visceral and emotional level.”

“Stephen King is a legendary storyteller and the master at this genre,” Marina Grasic, CEO of Cargo Entertainment, who are lining up funding for the film. “We believe the reteaming of King with Cusack is a winning combination that audiences around the world will want to see.”

Cusack will play a slightly technophobic comic book artist who returns from a pitch meeting to discover that a worldwide "pulse" delivered to mobile devices has transformed much of the population into mindless, violent monsters. If King remains true to form, the ending will be different in the movie than the book, since it was not widely liked by the readers and apparently one previous draft of the story written by King already featured a different conclusion to the story.