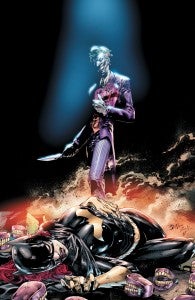 Since the launch of DC's New 52, there has been some speculation as to exactly what The Joker would look like when he appeared again. With slight changes to the looks of many of its biggest characters being a big part of what generated conversation and controversy when the relaunch happened, The Joker's had the potential to be the most dramatic, as the first issue of Detective Comics saw the character disappear into the night after having had the skin surgically removed from his face to alter his iconic appearance. And while most of us are still assuming that in the long run, we'll just end up with a version of The Joker that looks a little more like the Heath Ledger version from Christopher Nolan's The Dark Knight, fans are getting their first official looks at the character in the solicitations for November's Batman #14 and  #14, and it appears that little has changed. The character will appear in the forthcoming Death of the Family crossover, where he's ironically facing off against every member of the Bat-family except Jason Todd, currently starring in Red Hood and the Outlaws, which features Superman on its November cover instead. Jason Todd, of course, was The Joker's murder victim in the classic Batman tale A Death in the Family. 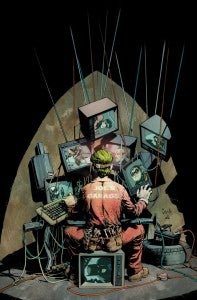 On the Batman cover, we only see the character from the back, which might make the appearance of what appears to be a belt or some kind of strap on the back of his head a little perplexing if it weren't for the cover to Batgirl, seen above, which seems to suggest that he's actually strapped a new face onto his head. Whose is anyone's guess, but will surely be a plot point. I can't help but notice the "Joe's Garage" shirt and wonder whether the old "Joe Kerr" identity, one that we saw trotted out as a poorly-considered alias during the aforementioned A Death in the Family, might make another appearance in this storyline, as Joker reportedly sets out to kill all of the bat-characters (in what appears to be a makeshift knockoff of the Batcave).