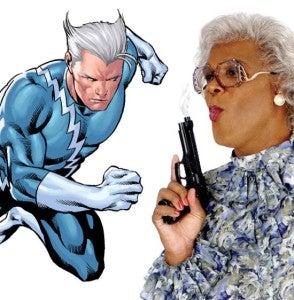 Ever since news broke that Quicksilver would be appearing in both The Avengers 2 and X-Men: Days Of Future Past, fans have been debating which film will have the better Quicksilver. In a chat session to promote Much Ado About Nothing, a fan put that exact question to Avengers 2 director Joss Whedon himself (at the 5:45 mark in video below).

Joss Whedon answered the question in true Whedon fashion. Joss Whedon said, “I like to think there’s going to be third even awesomer Quicksilver in some other movie. Maybe, Tyler Perry will have a movie with Quicksilver in it.”

Considering what happened when Bryan Singer joked about casting Lady Gaga as Dazzler in X-Men: Days Of Future Past, we’re wondering how long it’s going to be before someone in the entertainment press seriously reports that Tyler Perry is making a Quicksilver movie.

Attack On Titan Reveals Update For Next Chapter

The Mandalorian References a Fan-Favorite Star Wars: Knights of the Old Republic Character