artist Pete Woods provided the image above to fans on his Facebook page today, teasing the return of former (pre-New 52) Justice League member Gypsy in an upcoming issue of the series. "I spent last night working on a character design for an upcoming issue of Vibe," wrote Woods, and the comments thread that followed was full of users applauding the return of the character. The original Gypsy was, along with Vibe, a member of the "Detroit Era" of the Justice League. Along with characters like Steel (not that one) and Martian Manhunter, they bridged the gap between the classic "Satellite Era" in which the Justice League was populated by DC's heaviest hitters and the Giffen-DeMatteis years, when the book became a kind of superhero workplace dramedy starring Blue Beetle, Booster Gold and other fairly-anonymous (at the time) heroes. 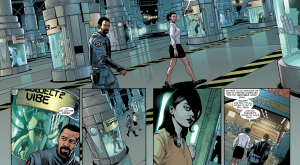 During that time, Gypsy foresaw (and then witnessed in realtime) the death of Vibe. The character also appeared briefly in Justice League of America's Vibe #1, inside one of the tube-like cells that held characters like Crisis on Infinite Earths's Pariah and Doom Patrol's Scissorman.

Justice League Detroit's Gypsy Getting a New 52 Redesign in Vibe