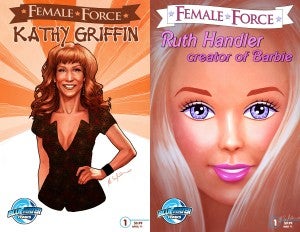 Female Force: Kathy Griffin-The Whole Damned Story examines the comedian's early years and how it shaped and propelled her to become one of the most outrageously outspoken and polarizing performers. The comic also focuses on how Griffin makes a difference in the world through her outreach in various communities such as the LGBT community. Female Force: Kathy Griffin-The Whole Damned Story is written by freelance journalist Marc Shapiro and penciled by Gene DeCicco.

Female Force: Ruth Handler, the Creator of Barbie tells the story of one of the most iconic and influential toys ever designed. The comic looks at the life and legacy of Barbie’s creator, the late Ruth Handler. The Handler/Barbie biography is written by Tara Broeckel with pencils by Neil Alexander.

“Barbie and her creators, specifically Handler, are so iconic that it is hard to come up with something to say that hasn't been said, but I'm confident that this book will leave her (Barbie and Handler) maybe a bit exposed,” said author Tara Broeckel. “Their collective story is so complex that often times the darker narrative is left untold.”

According to Bluewater Productions, the Handler/Barbie biography tells the story of how America's favorite fashion doll emerged from the seedy underworld of German sex symbols and cigarette shop gag gifts to become one of history's most iconic women.

In reference to both the Kathy Griffin and Ruth Handler biographies being released on the same day, Bluewater president Darren G. Davis said “On its face, neither should have anything in common with the other, but once you read their stories, you see the common thread. They are strong, influential women who have endured personal and professional challenges and have taken the marketing of their brand to whole new levels.”