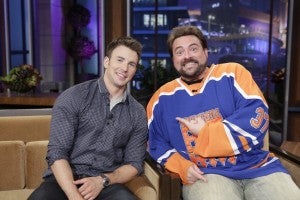 "I got hugged by Captain America!" Kevin Smith said as his interview on The Tonight Show With Jay Leno began a few minutes ago.

That's because he was joining Captain America: The Winter Soldier star Chris Evans on the show, Evans there to ride the wave of Marvel-related press for Iron Man 3 in promoting his indie film The Iceman with Man of Steel villain Henry Cavill and Smith on the set to promote Jay & Silent Bob's Super Groovy Cartoon Movie.

"When you get on The Tonight Show, you're like 'This is going to be awesome because every ex-girlfriend I ever had now has to reevaluate me.' They sit there and they go, 'I regret letting him go,' and then you put me next to Captain America, dude. That's tough! It's real tough to sit next to a man that attractive. It's like Captain America and the real America."

He added, indicating his hockey jersey, "Also, he's a dude who's been in a comic book movie, I'm the one in the costume. I look like his idiot kid sidekick or something like that."

Smith then presented his ticket stub from a trip to see Iron Man 3, which he praised effusively.

"I haven't seen it yet," Evans admitted. "I hear it's really good."

"You're not in it," Smith assured him. "That was the weird part!"

He also shared a story about having been accosted at the theater by fans of Comic Book Men, who told him that he was shorter and heavier in person than he looked on TV.

"The movie was wonderful but at the end of it I wished I had my own iron suit as well," the director joked.

Asked whether he'd met Evans before, Smith said that he hadn't, but related a story about a radio show on which he and Jay Mewes had followed Evans.

"This is the first time we actually met and embraced and stuff," Smith joked. "I followed you on a radio show in San Diego and me and Jason Mewes were there to be the next guests. He was there to be interviewed and stuff--there was a little window between studios. We came in and Mewes starts futzing with everything, pushing levers and buttons - and the lady presses the button that lets his voice go into the room. [Evans] is chatting with the radio hosts and his buddies and stuff and all of a sudden Mewes's voice comes in and he's like 'Oo, oo, oo, Captain America.' All the dudes on the show, they're facing the windows so they see Mewes, they're like 'ah, it's that dude from Clerks. And then Captain America turns around, stone cold, like this, so harsh that I was like, 'He's gonna whip a shield at you, dude.'"

Evans laughed, saying that he didn't even remember that event, and Smith said that's why the hug was so nice. "That day I thought you were a bully, but today you're a hero!"