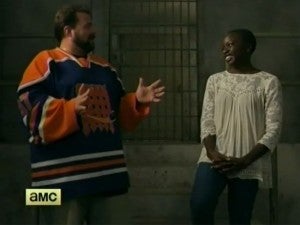 During The Walking Dead Season 4 Preview Weekend, Comic-Book Men’s Kevin Smith chatted with Danai Gurira, who plays Michonne. Kevin Smith asked Danai Gurira what was going to happen with her character in Season 4.

Danai Gurira said, “Michonne, as we saw, she is getting more and more connected to the group, and I think you’ll see more of that, and the complexities in the community, and those sorts of things.”

Kevin Smith remarked, “You’re like the Boba Fett of The Walking Dead. Everyone just loves you. They have no idea about your back story yet. It’s coming in drips and drabs, but they’re still like, ‘We want more! We want more!’”

This isn't the first time that Kevin Smith has drawn a comparison between a Walking Dead character and a Star Wars character. Kevin Smith previously said, "Daryl is like the Han Solo of the show, man. He’s all attitude. He’s smooth. He’s crisp."