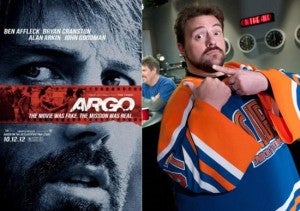 While Ben Affleck being cast as Batman has created quite the debate on the Internet, there is at least one guy who could not be more ecstatic about the news. Director Kevin Smith is good friends with Ben Affleck and cast him in a couple of his own movies.

In his latest Hollywood Babble-On podcast, Kevin Smith said, “All I’m saying is that if this was the nineties, you know I would be cast as The Penguin,man. One of the greatest things ever happened to me, and I didn’t see this one f***ing coming a mile away.”

Smith continued, “I do a f***ing show called Fatman on Batman. In addition to that, I spent twelve years working with the f***ing dude, and I could never put two and two together and see that one glorious day that Batman would be one of my closest friends. This is the greatest thing that ever happened. A dude I know, it’s f***ing Batfleck, dude.”

In regards to how he thinks Affleck will do in the role, Smith said, “He’s a total Bruce Wayne, man, and Batman come on. With all due respect to everyone who’s ever worn the cowl, you know, you put on the mask and pick a voice, and the f***ing the mask does most of the work for you, man. You’ve just got to be able to kind of brood and stuff.”

Smith also added, “I’m happy, because I’ve been on record many times saying I think Ben Affleck can be anything he wants. He can act in anything. I think he’s an amazing actor. He could even play the shark in a Jaws remake.”

Kevin Smith On Ben Affleck As Batman: "The Greatest Thing That Ever Happened"