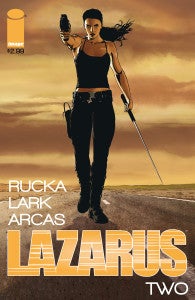 Image Comics announced today that the second issue of Lazarus, Greg Rucka and Michael Lark's dystopian vision of a feudal future, has sold out, prompting a second printing that will be in stores on August 28. Fans who want a copy before the end of next month can pick up the first two issues of the series at ComiXology. The series follows Forever Carlyle, the powerful Carlyle Family's "Lazarus," a genetically-enhanced young woman who cannot be killed and protects the Family's interests and resources. Raised to believe she is a loved member of the Family, Forever's world begins to fall apart as she questions the brutal acts she has been raised to believe are normal. You can read our conversation with Rucka and Lark about the decision to make the book through Image here, and a "commentary track"-style interview that focuses on the sold-out first issue of the series here. "It took a long time for the stars to align for this" series, Rucka told ComicBook.com. "I think we'd started talking about the other project at least three years ago and that was–well, no, it would have been 2009 because that's when I had the idea for it and that never gelled right. Then the idea for Lazarus came along as described in the back matter and there's very little embellishment in the confessional backmatter; that really is pretty much how it happened. I had had conversations with Eric Stephenson at Image; I had had both Warren Ellis and Ed Brubaker e-mail me at separate points and say 'Why aren't you doing something at Image?'" Lark added, "This one was instantaneous. The moment Greg told me what his idea was for it, it was really an instantaneous thing. We talked to Eric and had something going at Image within a week, it seemed like." The second printing of Lazarus #2 can be pre-ordered now (Diamond code: JUN138142) and will be in stores on August 28, the same day as Lazarus #3.

Lazarus #2 Sold Out, Will Get Second Print in August