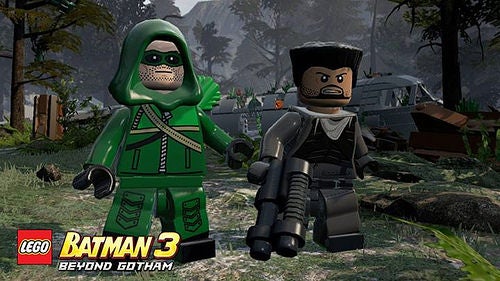 For those wishing that Batman existed in the same universe as The CW's Arrow, LEGO is finally granting that desire.

LEGO Batman 3: Beyond Gotham will launch the Arrow pack today, bringing Stephen Amell's Emerald Archer to the world of LEGO Batman for a side-adventure set on the island of Lian Yu. In the downloadable game, players will control Arrow and his cohorts across the island.

The download will feature other playable Arrow stars such as Arsenal, Diggle, Black Canary, Slade Wilson, Malcolm Merlyn, and more. You can check out the full trailer below, where Oliver Queen becomes something else. Something...pointy. And Arrow-y.

If Arrow just had a Justice League communicator on hand, LEGO Batman could get him out of there in no time.

The Arrow Pack is available for download today on the Playstation 3 and Playstation 4, and will be available tomorrow on X-Box One, X-Box 360, and PC. It will run for $2.99 across all platforms.