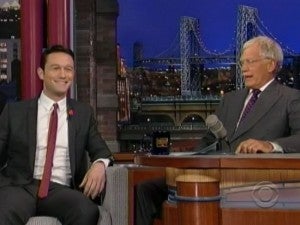 On Wednesday night, Joseph Gordon-Levitt dropped by the Late Show with David Letterman to promote his upcoming movie Don Juan, but Letterman wanted to set the record straight about Batman first.

“I want to talk to you about the Batman situation,” said Letterman. “Because I was under the impression and I was eager to convey that impression to others that you were probably going to…that Batman was dead and you were going to be the new Batman. Because that’s what I suspicioned from watching the movie. Now, what happened?”

Gordon-Levitt responded, “Well, I think these new movies aren’t necessarily…I don’t know first of all. I haven’t read any of the new movies. I’m not involved in them at all. But I don’t know if they are so much a continuation of the Christopher Nolan Batman.”

After pointing out that the new movie was going to feature both Batman and Superman, Letterman expressed more confusion over the casting. “So who’s going to be the Superman?” asked Letterman. “You don’t know that either. Because we know it’s Ben Affleck is going to be the Batman.”

Gordon-Levitt explained, “I think it’s the same guy who played Superman in this Superman movie that just came out over the summer.”

Letterman continued, “Did you call anybody and say what about me? You know I was Batman’s buddy. How many Batman movies were you in?”

Gordon-Levitt answered, “I was only in one on them. But Christopher Nolan, the filmmaker, made three Batman movies, and in the ending, what you’re referring to is the character I play who’s named John Robin Blake is in the Batcave at the end. I’m assuming everyone’s seen the movie. I apologize if I spoiled the movie. I apologize if anyone hasn’t seen it yet because I just ruined the ending, but Dave already spoiled it, so it’s not my fault. But that’s what you’re referring to. And I just think it’s a good ending to those movies.”

Gordon-Levitt added, “And it talks about in all three of the movies…it talks about how Batman is more than a man. It’s a symbol, and we all have a hero inside of us, so passing the mantle onto another person, another man, I think was a really good ending.”

Letterman asked, “So why are people all upset that it’s Ben Affleck as Batman?” Gordon-Levitt replied, “I don’t know. I think he’s going to be really good.”

My Hero Academia Unleashes Shoto's Most Powerful Attack To Date