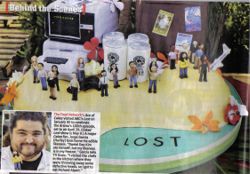 Fans of Food Network’s Ace of Cakes know that Chef Duff Goldman takes sugar, flour, and power tools and fulfills the dreams of fanboys everywhere. From his awesome Star Wars cakes to a giant severed toe for the annual Lebowski Fest to an enormous recreation of Hogwarts, there’s nothing Duff and his crew at Charm City Cakes won’t make in cake form. And now, the acclaimed chef has tackled the world of Lost for his next masterpiece in cake. In the Behind the Scenes section of the February 16th issue of TV Guide, fans of the ABC series can get a sneak peek of the cake Chef Duff made to commemorate the 100th episode of Lost. Duff and his crew unveiled the cake on January 30th to the cast and crew. The cake was a huge replica of the beach, complete with a life-sized briefcase, the computer from the hatch (with the cursed set of 7 numbers onscreen), tropical flowers, and much more. The most life-like decoration was a set of 4 Dharma Initiative Beer Cans. The cast of Lost also adorned the cake, sculpted in what appeared to be Fondant or Molding Chocolate. The replicas were a big hit amongst the cast. Several took their likenesses home with them. But, at least one castaway never made it off the island. “Daniel Dae Kim [Jin] ate himself,” revealed Jorge Garcia, who plays Hurley. Garcia was also granted access to Duff’s kitchen and was able to watch as the cake was being made. Fans of Lost can also watch the birth of the 100th episode cake on the May 9th episode of Ace of Cakes.

Lost Cast Has Their Cake And Eats It Too!