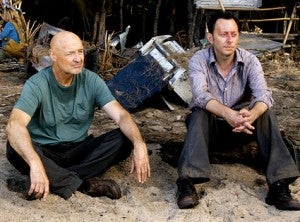 [/caption] The season finale of "Lost", entitled "The Incident", has plenty of storylines: Sawyer, Juliet, and Kate on a submarine, Hurley, Jin, and Miles attempting a rescue, and Jack attempting to change the past by exploding a bomb. But we'll tackle the most interesting storyline of all: Locke is going to kill Jacob. Throughout the series, we've wondered exactly who--or WHAT--Jacob is. What is his purpose? Does he control the island? Or does he have some powers over the residents? We've seen him inside a house in a rocking chair, but we never got a clear look at his face. He's a mystery to us. So let's ask some Jacob-related questions and attempt to answer them.Why is Locke leading the Others to Jacob? Theories are aplenty here. It's possible that Locke wants to show the residents the man behind the curtain. Jacob seems to have instilled a huge sense of fear into the Others. Maybe Locke realizes that Jacob's bark is louder than his bite, and he wants everyone to see it. Another theory is that Jacob doesn't really exist. He's been fabricated by Richard Alpert, who convinced Ben that Jacob is real. Locke knows that Jacob doesn't exist, and he wants the Others to know it as well. That way he can bring all of those people to his side for the upcoming war. But if Jacob isn't real... How is Locke going to kill Jacob? A friend of mine believes that if Jacob is real, Locke is going to kill him with THE knife. You know--the knife that young Locke picked out as 'his' when Richard Alpert came to visit him? It's possible that 'killing' Jacob isn't doing it in the physical sense. Maybe Jacob is dead already. Or, maybe Jacob really is alive, but Locke isn't going to kill him as in putting him into the ground. He's going to punt Jacob from the island. Jacob wouldn't be able to live without the island. Is Jacob good or bad? Every indication we've been given says that Jacob isn't one of the good guys. However, what if we (and Locke) are wrong about that? What if Locke is the crazy one and we've just believed him all along? What if Locke has let his connection with the island go to his head and now he's on a power trip? Who is Jacob? We're going out on a limb here, but we're saying that Jacob is the one and only Pierre Chang. We think he's someone that is familiar to viewers for sure. But Chang fits the bill. He disappeared back in the 70s, and he'd be an old man in 2007. While rocking chairs aren't the normal domain of tyrants, we could see an elderly Chang in one, passing the time. What do you think? Is Pierre Chang really Jacob?

Lost Season Finale: Will We Finally Learn About Jacob?