Lynd Ward is often referred to as the father of the American graphic novel, and now thanks to 217 Films and Penn State University Libraries some of his work will be digitized. Lynd Ward was a printmaker and illustrator, who lived from 1905 to 1985. Ward illustrated more than 200 books, and he was among the foremost graphic book artists of 20th-century America. Many of his books, prints, and artwork are held by major museums and libraries worldwide.His “stories without words,” such as "Song Without Words: A Book of Engravings on Wood" (1930), are precursors to the modern graphic novel. Ward produced six of these books between 1929 and 1937, and the storylines were told entirely through wood engravings. Ward was known for having a deep personal commitment to social justice and the plight of the working man surrounding the years of the Great Depression.

217 Films will showcase many of Lynn Ward's works in a new film titled “O Brother Man: The Art and Life of Lynd Ward.” The documentary is scheduled for release in December 2011. The documentary will also include an interview with the artist’s daughter Robin Ward Savage.

As a celebration of the art and life of Lynd Ward (1905-1985), 217 Films has given a gift to Penn State University Libraries to digitize selected Ward woodcuts and wood engravings.

“We at 217 Films are delighted to contribute to Penn State's Libraries in support of the digitization of the works of Lynd Ward,” said director Michael Maglaras. “The best way to access works of art in our fast-moving times is to do so online, and with the digitization of even a part of Ward’s vast output, we will help to introduce him to a new audience.”

Barbara I. Dewey, dean of University Libraries and Scholarly Communication at Penn State said, "While alerting a wider audience to this artist extraordinaire, the documentary will also point to Penn State Libraries' strong holdings in fine printing, printmaking techniques, children’s books, graphic novels, and original art work for illustrated books. Additionally 217 Films' gift will help us digitize Ward's work and expand research opportunities for scholars and students interested in learning more about the creative process, illustration, and the book arts." 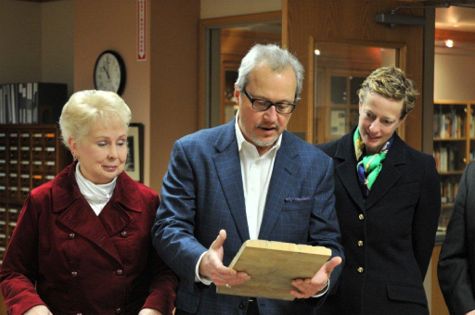 Lynd Ward Collection To Be Digitized