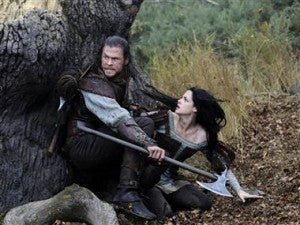 was the only movie in the top five this weekend that lived up to its projections, as the box office took a huge hit and both Tom Cruise and Adam Sandler's new movies flopped in their opening frame. Madagascar 3 took $35.5 million in its second week of release to win the box office crown, with both Rock of Ages ($15.08 million) and That's My Boy taking ($13 million) taking in just a shade over half of what they were expected to make.

Prometheus suffered a 60% second-week drop, which is pretty substantial but certainly better than the 72.8% Friday-to-Friday drop that was putting it on pace to put the movie in a bigger free-fall than last year's much-maligned adaptation of DC Entertainment's Green Lantern. While its week-to-week drop wasn't as substantial as Green Lantern's, Prometheus still lags behind the superhero tentpole after two weeks at the domestic box office...but only by $140,000, meaning that pace is likely to be reversed by next week.

Snow White & the Huntsman didn't disappoint, either--it didn't make the $20 million some analysts were predicting for it, but in an anemic weekend its $13.8 million was enough to take fourth place, shunting That's My Boy--an Adam Sandler vehicle with a Fathers' Day tie-in--down to fifth.

Marvel's The Avengers took seventh place, making less than $10 million for the first time and now lags behind the pace that Avatar (the highest-grossing film of all time) was on at the same time in its release. The Avengers had not been widely expected to take that record, but the fact that it had managed to stay on pace for so long was keeping hope alive for some fans.