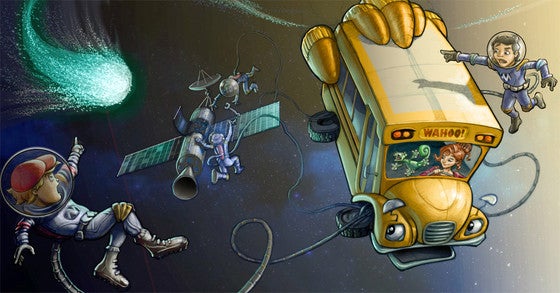 Netflix and Scholastic Media are teaming to launch a new CG-animated original series based on the 1990s' PBS kids TV series The Magic School Bus.

Netflix has ordered 26 episodes of The Magic School Bus 360° to launch on in 2016, with original executive producer and Scholastic president Deborah Forte returning to produce.

"Scholastic Media is a powerhouse creator and producer of top-quality programming for kids and families and its flagship series like The Magic School Bus, Clifford The Big Red Dog and Goosebumps have been huge hits on Netflix in all our territories," said Ted Sarandos, Chief Content Officer of Netflix. "We're thrilled to expand our relationships and to be the first-run home of The Magic School Bus 360°, introducing a whole new generation to Ms. Frizzle and her hijinks."

Both Clifford the Big Red Dog and Goosebumps are currently in development as theatrical features for Scholastic. Clifford was a popular PBS series in the earlyi 2000s, which ended when star John Ritter -- who voiced Clifford -- left the show to appear on 8 Simple Rules For Dating My Teenage Daughter. PBS rebranded the series as Clifford's Puppy Days, reusing many of the same actors but without Ritter since Clifford didn't speak in that version. A feature-length film -- Clifford's Really Big Movie -- was released in 2003, shortly before Ritter's untimely death.

Goosebumps ran from 1995 to 1998 and has recently been revived in reruns on The Hub. The feature film adaptation will star Jack Black, Dylan Minnette, Odeya Rush, Amy Ryan, Jillian Bell and Ryan Lee. The film is scheduled to be released on August 7, 2015.

The original Magic School Bus targeted school-aged children and focused on science and technology lessons. The series was based on the book series by Joanna Cole and Bruce Degan. Lily Tomlin, who voiced the bus driver Ms. Frizzle, won a Daytime Emmy in 1995.

Magic School Bus Getting a Reboot From Netflix