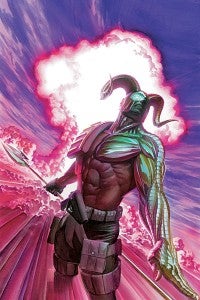 If you've been keeping up with the twists, turns and exploits of the Justice Society of America, and really, you should, then you're aware that the team has undergone some startling changes of late, not the least of which has been the split of the very large super team into two teams and, consequently, two books. Fans now have the option of following the mostly traditional membership in Justice Society of America or reading all about the team of newer members in JSA All-Stars. One of the reigning elements over the first three issues of JSA All-Stars has been the ongoing conflict between co-leaders Magog and Power Girl, which recently came to a full-on confrontation in JSA Annual #2. The end result? Magog's walking away from the team. Whether that's for good or just a temporary departure, hopefully this signals a breath of fresh air following the departure of a character that had, sadly, become one-note. Introduced early in the pages of Justice Society of America #12 as Lance, the character of Magog developed after a visit and blessing of power from the god Gog. Magog's military background made him a great fit for the team, as he brought a tactical savvy and a will to see justice served to the new team, who was still struggling to find its focus with several new additions. As Magog grew more and more irritated with the JSA's focus on mercy for its foes and its lack of security, a new group splintered off from the team as a whole, the All-Stars, and a cracking new vein of stories seemed to open up, with Magog poised to become an interesting and integral part of this new group. It's a shame that he became so one-dimensional so quickly after this new team formed. Magog's discovery of a secret, underground facility in the JSA Annual #2 brings him into direct conflict with his team, the JSA proper and Power Girl, and frankly it couldn't have come soon enough. We had seen the tension building between the decidedly humane Power Girl and the lethal force-endorsing Magog. Honestly, after three issues of JSA All-Stars, that tension was starting to get old, and Magog was reading as a very shrill, stifled character in a short period of time, at least in the context of this particular team setting. Magog did bring a great sense of modern urgency to the new team, with his tactical precision and focus on discipline a needed element for this very green team, and that part of him will be missed, but the endless anger and frustration with staying within the law will not. Perhaps he will continue to flourish and grow in his own solo, ongoing series, where he can build his own worthy rogues gallery. Perhaps someday he'll be rejoining the JSA All-Stars, maybe as a more developed, seasoned character with greater complexity, or maybe he'll be a future villain. Either way he's going to have more to offer later than he does now.