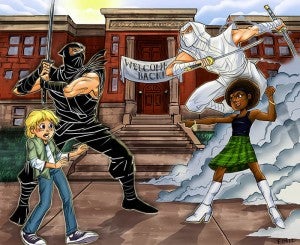 , the onetime Tokyopop series from Reading With Pictures chief Josh Elder, will return in December with the help of Kickstarter funding. The all-ages comedy/adventure series, which follows the exploits of an elementary schooler who gets a literal mail-order ninja who comes to help him cope with the ordinary and not-so-ordinary trials and tribulations of daily life. But don't take my word for it; here's the official description:

Says Elder on the Kickstarter page, "Mail Order Ninja is an award-winning graphic novel series first published by TOKYOPOP in 2005 and a nationally syndicated comic strip distributed by Universal Press Syndicate starting in 2007. Mail Order Ninja has effectively been on hiatus since 2008, but I never gave up on the series. I spent the last four years developing ninjarific new story content and recruiting a clan of talented artists (including Tim Smith 3, Dean Trippe, Cef Grima and Chris Giarrusso)." Of course, part of the reason that Mail Order Ninja fell by the wayside a bit was the fact that Tokyopop folded. In the time since the publisher ceased to exist, the first graphic novels have fallen out of print--but they'll be back soon as rewards for donors to the Kickstarter campaign. You can hear more--from Elder directly--by playing the video below, which is also embedded on the fundraising page. The project is currently about 75% funded with less than two weeks left to go...so if you want more Mail Order Ninja, now's as good a time as any.