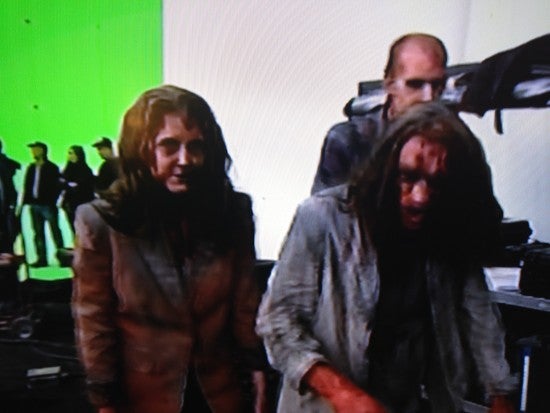 As part of the incredible video commentary/screen-in-screen experience on the Man of Steel Bonus Features Blu-ray, director Zack Snyder shared with fans an outtake in which Superman and Lois Lane look up from their first kiss, only to be accosted by zombies who look like they just tumbled out of Snyder's 2004 remake of George A. Romero's horror classic Dawn of the Dead.

In a segment titled "A Surprise Visit to the Set," Snyder replaced some of the filthy and bloodied survivors of the Metropolis alien attack with zombies--and then had them stumble, hissing and groaning, toward Superman and Lois rather than just emerging from the rubble to look around as the survivors do in the film.

"Oh, my God!" Cavill laughs as the zombies reach Lois, breaking character and causing Snyder to crack up and call cut, then reshoots the scene with Perry White, Steve Lombard and Jenny the Intern as the survivors in question.