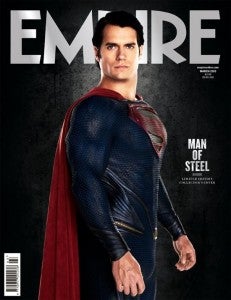 Speaking with a blogger during production of Man of Steel, his upcoming reboot of the Superman mythology from filmmaker Zack Snyder, leading man Henry Cavill talked a bit about how things are different for an actor who, as a byproduct of getting a job that's physically demanding, beefs up his physical presence to suit it.

"The mindset when you change your body physically and your ability physically--there is more of a self-belief, certainly; there is more of a security in yourself," Cavill told the interviewer, currently shared at Voices of Krypton. "It's quite a unique feeling when you have a moment...and you think, 'Oh, wow, I can do this stuff. I'm probably in the top ten of fit people in this room here,' and that's a very good feeling. Of course someone like me--I always keep myself in check because it means I'm going to continue to push hard. I never allow myself to slip into an arrogance because that I believe will hold me back as opposed to help me advance.

"When it comes to playing a role like Theseus or like the other role--it does help an awful lot because the environment around you behaves differently. People perceive you differently, and that helps you be the character which you're trying to be. We are indeed a product of those around us because we often behave how we're treated. When people are looking at you in that sort of way--'Whoa, he looks kind of dangerous' or 'That guy looks like he could protect me' or whatever it is, it certainly gives you that extra bit of something that helps you play the character in a more realistic way."

Cavill stars in the film alongside Amy Adams, Laurence Fishburne and Michael Shannon. Man of Steel is due in theaters June 14.

Man of Steel Star Cavill on Transforming Into Superman